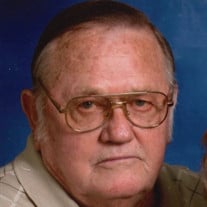 Milton August "Red" Sanders, 86, of Jackson, Missouri entered Heaven Sunday, August 22, 2021 at Southeast Hospital. He was born June 24, 1935 in Saint Louis, Missouri to August Henry and Mildred Emma Kraichely Sanders. He and Beverly Holloman were married November 14, 1954. Milton retired from Cape Girardeau Fire Department in 1985 after 31 years of service. He and Beverly owned cattle, horses, land, sheep, and a sawmill, including the Pom Hut Kennel until 2010. Milton was a fine craftsman and left his children and grandchildren beautiful pieces of furniture to cherish for generations. Survivors include his wife, Beverly Sanders of Jackson; two sons, Randy (Karen) Sanders of Zalma, Missouri and Ron Sanders of Scott City, Missouri; a brother, Herb (Lois) Sanders; five grandchildren; seven great-grandchildren; and a multitude of friends. He was preceded in death by his parents. Visitation will be 4:00 pm to 8:00 pm Wednesday, August 25, 2021 at Ford and Sons Mt. Auburn Funeral Home in Cape Girardeau. Funeral service will be 10:00 am Thursday, August 26, 2021 at Ford and Sons Mt. Auburn Funeral Home in Cape Girardeau with the Rev. Frank Burgess officiating. Entombment will be at Cape County Memorial Park Mausoleum in Cape Girardeau. Memorial contributions may be given to St. Jude Children's Research Hospital, 501 St. Jude Place, Memphis, TN 38105 . He talked about going to his Heavenly home the past few weeks and the comforting words that his family will hold near until we meet again, I'm ready. From the Sanders family on behalf of Milton, we pray you will know and trust Jesus just as he did. Online condolences may be made at www.fordandsonsfuneralhome.com. Ford and Sons Funeral Home - Mt. Auburn is in charge of arrangements.

The family of Milton August Sanders created this Life Tributes page to make it easy to share your memories.

Send flowers to the Sanders family.