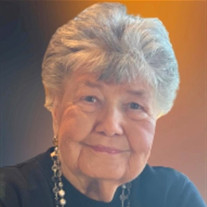 Mary Louise Spell of Cape Girardeau, who devoted her life to her family, her faith and her community, passed away peacefully Thursday afternoon, May 5, 2022, at Saint Francis Medical Center surrounded by her children and other family members. Mary was born Oct. 27, 1938, in Cape Girardeau to Donald and Edna Zimmerman Welch. She met Dale Spell at Cape Central High School in 1955 shortly after he and his family moved to Cape Girardeau. Upon seeing him for the first time, she reportedly told a classmate "Keep your hands off of him, he's mine!" Mary and Dale were married Aug. 16, 1958, at Maple Avenue United Methodist Church in Cape Girardeau. They both attended Southeast Missouri State College where Dale studied civil engineering and Mary worked toward an elementary education teaching degree. Mary also attended Henderson State College in Arkadelphia, Arkansas, and spent 12 years teaching at schools in Missouri and Arkansas. Meanwhile, Dale worked as a heavy equipment diesel mechanic for R.B. Potashnick Co. and later Delta Asphalt at construction sites throughout the Midwest. During those years, the Spell family grew to include four daughters - Stacy, Chris, Beth and Jennifer. The family moved often because of Dale's job, and in each community they lived Mary made three initial stops - the public library to obtain library cards for her children, the church to establish family membership, and the local schools where she often volunteered and served as a substitute teacher. The Spells returned to Cape Girardeau in 1974 when Dale became affiliated with the D.L. Harrison Co. Mary joined the Southeast Missourian where she worked as a proofreader and reporter before becoming editor of the newspaper's religion and family living sections. For several years she penned a weekly column titled "My Little Corner of the World" in which she shared her perspectives on family, faith, and life in Cape Girardeau. In 1985 Mary was named director of the public relations department at Saint Francis Medical Center. Over the next 20 years she oversaw the department's transition into a multimedia marketing operation that has been instrumental in the hospital's growth to become one of the largest healthcare providers in a five-state region. She left the marketing office in the late 1990s and became a development officer with the Saint Francis Foundation. She retired from the medical center in 2005 but continued serving the organization as a member and president of the Saint Francis Auxiliary. Not one to rest in her retirement, Mary served as an "unofficial" ambassador for Cape Girardeau when she became "Grandma Mary the Cookie Lady" at the local Holiday Inn Express. For more than a decade, Mary greeted hotel guests with a smile and fresh-baked cookies. "It was a joy for her to meet people from all over the world and introduce them to the community she loved so much," according to family members. Mary was a lifelong member of Maple Avenue United Methodist Church where she was a founder of the J.O.Y. Sunday School class and served in various capacities over the years including the church's administrative board and ministries council. In addition, she was a member of the Diabetes Association, the Cape Central Junior High School Parent Teacher Association and the Cape Girardeau Professional Women's Organization which named her Woman of the Year in 1984, recognizing her work toward the advancement of women in business. Mary received numerous accolades over the years including the Silver Medal Award from the local chapter of the American Advertising Federation in recognition of her marketing achievements and several recognitions from the Otahki Girl Scout Council for her contributions to Girl Scouting. in 2009 she was named an honorary lifetime member of the Friends of Saint Francis. In addition to her parents, she was preceded in death by her husband in 2021, their youngest daughter, Jennifer Spell Dowdy, in 2005, and a younger sister, Donna Sue May, in 1994. Mary's loving survivors include daughters Stacy (Jim) Jansen of Brentwood, Missouri, Chris (David) Hulsey of Eureka, Missouri, and Beth (Scott) Friedrich of Perkins, Missouri; three nieces, Sara (Matt) Sprouse, the Rev. Alecia Fischer and Carrie (Allen) Pack; and a nephew, Keith (Jill) Fischer. She is also survived by 10 grandchildren and seven great-grandchildren. Her grandchildren are Nick (Katie) Jansen, Carly Jansen, Jon (Mila) Blank, Adam Hulsey, Ellen Hulsey, Hanna Hulsey (Jay) Nettesheim, Paige (Thomas) Hulsey, Will (Claudia) Friedrich, Kyle Friedrich and Stephen (Noah) Dowdy. The great-grandchildren are Alleyson and Loralie Hulsey, Logan Blank, Brooklyn and Asher Nettesheim, Ryker Friedrich and Freya Jansen. Visitation will be 9:30 am to 12:00 pm on Monday, May 9, 2022 at Ford & Sons Mt. Auburn Chapel in Cape Girardeau. Funeral Service will be at 12:00 pm Monday, May 9, 2022 at Ford & Sons Mt. Auburn Chapel in Cape Girardeau with the reverends Alecia Fischer, Jim Cooper, Jeff Estes and Jim Dace officiating. The family requests that in lieu of flowers, memorial contributions be made to Maple United Methodist Church. Online condolences may be made at www.fordandsonsfuneralhome.com. Ford & Sons Funeral Home - Mt. Auburn is in charge of arrangements.

Mary Louise Spell of Cape Girardeau, who devoted her life to her family, her faith and her community, passed away peacefully Thursday afternoon, May 5, 2022, at Saint Francis Medical Center surrounded by her children and other family members. Mary... View Obituary & Service Information

The family of Mary Spell created this Life Tributes page to make it easy to share your memories.

Mary Louise Spell of Cape Girardeau, who devoted her life to...

Send flowers to the Spell family.