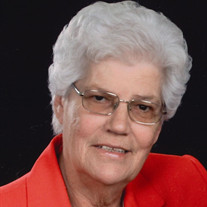 Mary Frances Pannier, 79, of Cape Girardeau, died Wednesday, October 7, 2020 at the Lutheran Home. She was born February 28, 1941 in Bertrand, Missouri to Charles Wesley and Frances Ellen Peters. She and Alfred F. Pannier were married December 20, 1959 in Bertrand, Missouri. She was a homemaker as Al took care of providing for the family. Al often said it was Mary that raised the kids to be who they are, as he was always away working most of the time while the kids were growing up. Loving survivors include her sons, Darryl (Ellen) Pannier of Cape Girardeau and Darren (Sara) Pannier of Sedalia; five grandchildren, Garrett (Natalie) Pannier of Millersville, Chelsea (Phillip) Davis of Lee's Summit, Kassidy Pannier of Cape Girardeau, Brice Pannier of Sedalia and Kiser Pannier of Sedalia; and two great-grandchildren, Jase Pannier and Kensley Pannier. She was preceded in death by her parents; husband; and two daughters, Laura Pannier on October 24, 1961 and Darla Pannier on July 25, 1989. She was a member of Maple United Methodist Church at the time of her death. Public visitation will be 10:00 am to 12:00 pm Saturday, October 10, 2020 at Ford and Sons Mount Auburn Funeral Home in Cape Girardeau. Due to COVID-19 restrictions, the family requests that mask and social distancing regulations be adhered to. A private service with interment at IOOF Cemetery in Charleston, Missouri will be held at 1:00 pm. The family wishes to extend sincere gratitude to Dr. Roderic Crist, The Lutheran Home, and Crystal Santos of Tri-County Hospice for their outstanding care of our mother, grandmother and great-grandmother. In lieu of flowers, the family requests memorial contributions to Darla M. Pannier Scholarship Fund at Cape Central High School c/o First State Community Bank or Maple United Methodist Church in Cape Girardeau. Online condolences may be made at www.fordandsonsfuneralhome.com.

The family of Mary Frances Pannier created this Life Tributes page to make it easy to share your memories.

Send flowers to the Pannier family.