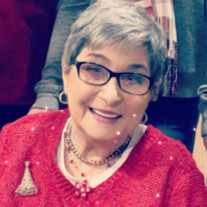 Mary Jewell Cox Mitchell, 80, of Cape Girardeau, Missouri passed away and went to her heavenly father Monday, February 8, 2021 at her daughter and son-in-law's residence. She was born September 19, 1940 in Fulton, Arkansas to Sam Beasley and Mary Virginia Purtle Cox. She and Jerry Douglas Mitchell were married in Fulton Arkansas. She began working at St. Francis Medical Center in 1978 in the supplies and clerical department. She was proud to be the first recipient of the "Employer of the Month Award." She worked there for twenty plus years. She enjoyed spending time with her family. She was an avid artist and enjoyed singing, dancing, sewing, crochet and shopping. She was a talented story teller mostly her favorite "ghost" stories. She was of the Baptist faith and prayed daily. Survivors include two daughters, Donnell (Lonnie) Mitchell-Baumbach of Largo, Florida, Bobbie Mitchell (Mark) Kohlfeld of Cape Girardeau; one son, James "JB" (Laura) Mitchell of Festus, Missouri; nine grandchildren, Heather Story Illers, Neil Berbling, Christopher Berbling, Jerry Ray Baumbach, Lisa Baumbach, Julia Kohlfeld, Taylor Kohlfeld, Hayley Mitchell-Wunderlich, Seth Mitchell; ten great-grandchildren. She was preceded in death by her parents, husband, and daughter, Dorothy Mitchell Berbling. There will be private services. Burial will be at New Lorimier Cemetery. Memorial contributions may be given to American Red Cross and The Avenue of Flags. Online condolences may be made at www.fordandsonsfuneralhome.com. Ford and Sons Funeral Home - Mt. Auburn is in charge of arrangements.

Mary Jewell Cox Mitchell, 80, of Cape Girardeau, Missouri passed away and went to her heavenly father Monday, February 8, 2021 at her daughter and son-in-law's residence. She was born September 19, 1940 in Fulton, Arkansas to Sam Beasley... View Obituary & Service Information

The family of Mary J Mitchell created this Life Tributes page to make it easy to share your memories.

Send flowers to the Mitchell family.