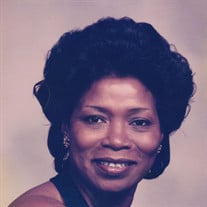 Mary Crafton, 74, of Cape Girardeau, Missouri passed away, Saturday, August 29, 2020 at Heartland Care and Rehab. She was born November 4, 1945 in Clarksdale, Mississippi to the late Wade and Inez Ewing. Mary was owner of Hakuna Matata Daycare... View Obituary & Service Information

The family of Mary Crafton created this Life Tributes page to make it easy to share your memories.

Send flowers to the Crafton family.