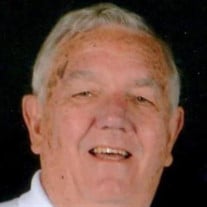 Martin D. Needels passed away August 14, 2021, at his home of a massive heart attack. He was born July 23, 1936, in St. Marys, Ohio, son of Thomas Jefferson Needels and Deva Marie Hanlin Needels. On August 21, 1962, Martin married Maribeth Wetzig, who passed away on April 21, 2002. On March 6, 2004, he married Margaret Popham, who survives. Martin served in the U.S. Air Force, 1955-59. He received a BA degree in history from Southern Arkansas University, MA and PhD. Degrees in history from the University of Nebraska. He taught in the History Department of Southeast Missouri State University from 1969-2001. Martin was an active member of Abbey Road Christian Church, serving in a number of leadership positions. In addition to his wife, Margaret, he is survived by son Thomas (Marisa) of Mt. Juliet, TN; daughter Jennifer of Cape Girardeau; stepsons Douglas (Jean) Popham of Tucson, AZ and David Popham (Rosalyn) of Wheaton, IL. He is also survived by grandson Taylor Needels of Cape Girardeau and granddaughter Lindsey Needels of Nashville, TN; step grandchildren Madeline and Lauren Popham of Tucson, AZ and Zachary and Alexander Popham of Wheaton, IL, as well as numerous nieces, nephews, their children and grandchildren. He was preceded in death by his parents, sister Betty Hetrick, brothers John and Jim Needels, and step sisters Maxine McMurray and Kathleen McMurray. Visitation will be held Friday, Aug. 20, 2021 from 5:00 to 8:00 p.m. at Ford and Sons Mt. Auburn Funeral Chapel. A celebration of life service will be Saturday, Aug. 21, 2021 at 10:00 a.m. at Abbey Road Christian Church with Rev. Elaine Schoepf officiating. Private burial will take place at a later date at Cape County Memorial Park Cemetery. In lieu of flowers, the family suggests donations to Abbey Road Christian Church or to the charity of your choice.

The family of Martin D. Needels created this Life Tributes page to make it easy to share your memories.

Send flowers to the Needels family.