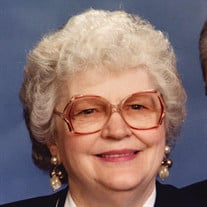 Martha Madline Hente, 93, of Cape Girardeau, Missouri passed away Friday, April 22, 2022 at Heartland Care and Rehab. She was born August 29, 1928 in Chaffee, Missouri to Charles Henry Bess and Mary Ella Emerick Bess. She and Robert Louis "Bob" Hente were married May 24, 1952 in Chaffee, Missouri. They shared 64 years of marriage before his passing on April 21, 2017. Martha retired as a sales clerk from JCPenney. She also worked at Child's IGA, A&P, Hirsch's Thriftway and the shoe factory in Chaffee. Martha was involved in pastoral care at Southeast Hospital, a member of the Southeast Hospital Auxiliary, and a member of the American Legion Ladies Auxiliary. She was a faithful member of Cape First Church. Survivors include a son, Robert (Patricia) Hente Jr. of Cape Girardeau; grandchildren, Brooks Hente, Dustin (Brandy) Hente, Amanda Hente; four great-grandchildren, Aria Hente, Claire Hente, Avia Hente, Westlyn Hente; sister, Mary Holland of St. Louis; several nieces, nephews and cousins. She was preceded in death by her parents and her husband, one sister and two brothers. Visitation will be Tuesday, April 26, 2022 from 4:00 to 7:00 p.m. at Ford and Sons Mt. Auburn Chapel. Funeral service will be Wednesday, April 27, 2022 at 10:00 a.m. at the funeral home with Rev. Mark Graham officiating. Burial will follow at the Missouri Veterans Cemetery at Bloomfield. Memorial contributions may be given to Mid-America Adult and Teen Challenge.

The family of Martha Madline Hente created this Life Tributes page to make it easy to share your memories.

Send flowers to the Hente family.