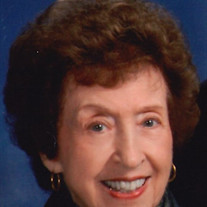 Martha Ellen Stovall Bender died peacefully surrounded by her loving family early July 21, 2021 at 92 years of age. She was born September 28, 1928 in Jackson, MO to Mattie Morton Stovall and Earl Wilson Stovall, Sr. She was predeceased by her parents, her infant sister, her brother Earl, Jr. and grandson Clayton Bender Van Wagner. Martha graduated from Jackson High School in 1946. She attended Southeast Missouri State College being active in The Hesperian Society, the Thespians, and the a cappella choir. On a regional choir tour, Martha met and went dancing with her future husband, Kenneth E. Bender. She graduated with a B.A. in History with a minor in Social Science May 15, 1950. They were married at First Presbyterian Church in Jackson that same afternoon. Martha later received a B.S. in Elementary Education and taught at Jefferson Elementary School. After which, she studied Library Science and served as a librarian at Kent Library for nearly ten years. Martha spent many years as a community volunteer dedicated particularly to the founding of the Cape River Heritage Museum. Other interests over the years included Garden Club, PEO, Cape Girardeau Bicentennial Commission Chairwoman, Riverfest organizer, and Missouri Advisory Council to the National Register of Historic Places appointed by Governor Bond. Martha was an avid reader, bridge player, and gardener as well as an accomplished cook and decorator. After the birth of their two daughters, the family became charter members of St. Andrew Lutheran Church. Martha and Kenneth also chaired St. Andrew's 50th Anniversary Celebration. Martha and Ken celebrated their 25th anniversary with a European tour and a later one with a trip to the British Isles, 50th with a family celebration at Melhana Plantation, 60th on a Caribbean cruise with their daughters and spouses, and 70th with a dinner and 50-car parade of friends and well-wishers at their home. Martha is survived by her husband Kenneth of 71 years, daughters Rebecca (John) Van Wagner, Kimberly (Ron) Foltz, four grandchildren, and six great grandchildren. Visitation will be at St. Andrew Lutheran Church Sunday, July 25 2-4 p.m. The service will be at the church Monday, July 26 11 a.m. with burial following at Cape County Memorial Park Cemetery. After, a luncheon will be served at the church. Memorial contributions may be made to Cape River Heritage Museum or St. Andrew Lutheran Church. Ford and Sons Funeral Home in Cape Girardeau is in charge of arrangements. Online condolences may be made at www.fordandsonsfuneralhome.com.

The family of Martha Ellen Bender created this Life Tributes page to make it easy to share your memories.

Send flowers to the Bender family.