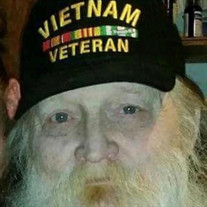 Lynn Lavern Maloney, age 72, peacefully joined his eternal home January 7, 2021 Lynn is survived by three siblings Kenneth Maloney, Rayetta Kimbel, and Kay Baker. Three children: James (Tammy) Maloney, Georgia (Dale) Rodgers, and Mildred (Robert) "Millie" Bowman. He also leaves his legacy in twenty three grandchildren, Tyler and Mason Craiglow, Hali, Codi, Neakeia, Tobi, Kobi, Bodi, Zoei, Andrea, Junior, and Lelani Rodgers, Dacoda Fornkohl, Bretten Dean, Meredith Lichtenegger Ashlee and Nick Bowman, Jamie, Jody, Jordan Maloney, Kyle, Hugh, and Katie as well Seven Great Grandchildren Kai'Dan, Ami'Yah, Zar'Iah Rodgers, Noah and Payton Maloney, Nash Rodgers, and Aftyn Dean. Lynn was the life of the party, a very humorous and honest man sometimes brutally honest that others may take offence. He was very caring and would give the shirt off his back to those around him. He was often described as a great man and a big teddy bear. He truly had a heart of gold. He loved being with his family had always been a mama's boy. He loved music and made others laugh anyway he could. He also loved to fish in his younger years as well as ride his Harley. He loved living in the fast lane while it lasted. His other love was the love of his Country and fellow brotherhood. Lynn is a veteran of the Vietnam War, serving between November 1967-September 1969, where he was known as "Fat Boy" and "Red" as he cooked for his unit during his time of service. He was always very proud of his service and took pride of his brotherhood. When visiting for Dr. Appointments and such he always enjoyed visiting his fellow comrades. If he ever came across someone displaced he would do everything he could to help. He was such a caring individual. He served two years with distinction in Vietnam, including aiding and received other commendations for his dedication and bravery. The discipline and patriotism he learned in ARMY never left him, as friends and family will attest. He was preceded in death by both his parents: Ray W. Maloney and Wilma Carmalea Maloney, Brother- Eldon Earnest Maloney, Daughter-Brandy Mignon Wanik-Maloney, Great Grandaughter -Rah'Nia Lashawan Rodgers. Visitation will be held 10:00 AM - 1:00 PM Monday, January 11, 2020 at the Ford and Sons Funeral Home in Jackson, MO. Funeral Services will be conducted at 1:00 PM Monday following visitation with Rev. Ronnie Brown officiating. Interment will take place in the Russell Heights Cemetery in Jackson, MO.

The family of Lynn Maloney created this Life Tributes page to make it easy to share your memories.

Send flowers to the Maloney family.