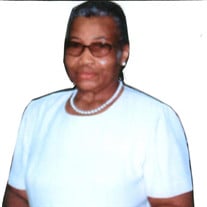 Lillian Jean Wynne, 87, of Cape Girardeau, Missouri was called to her heavenly home on Monday, August 31, 2020 surrounded by her loving family. She was born March 13, 1933 in Steele, Missouri, She was the fifth oldest child of Willie and Hattie Bell Pittman Hammonds. Lillian was a lifelong Christian believer in God and at the time of her passing was a member of New Horizon M.B. Church. Lillian attended school in Gobler, Missouri, but was forced to quit her learnings in the 8th grade to help support and raise her younger brothers and sisters after the passing of her parents. Lillian was always a hard worker and did all she could as a single mother of six children to ensure they had what they needed. She was affectionately known as "Lit or Aunt Lit" by close friends and family members. After living nine years in Kennett, Missouri she moved the family to Cape Girardeau in 1966 in search of better opportunities to care for her family. She and Eugene Wynne were united in matrimony in 1968. Her work experience includes domestic homemaker jobs, Homecrest Childrens Home in Kennett, Missouri, Superior Electric Company and Southeast Hospital in Cape Girardeau and Lee Rowan in Jackson, Missouri. After retirement Lillian enjoyed walking, spending time in her garden and spoiling her grandchildren. Survivors include two Sons, Jerry (Minnie) Hammonds and Ike Hammonds both of Cape Girardeau; two daughters, Aloise Fulks of Jefferson City, Missouri and Denise Wynne of Kennett, Missouri; four step-daughters, Geraldine Harrell, Mildred Hutson, Margaret Taylor, Christine Taylor; brother, James Hammonds of Chicago, Illinois; 10 grandchildren; 18 great-grandchildren; and many nieces and nephews. She was preceded in death by her parents; husband, Eugene Wynne; two sons, Charles and Allen Ray Hammonds; four brothers, Samuel, Willie Jr., Walter and Percy; and four sisters, Pearline, Jesse, Ernestine and Grace. Visitation will be 10:00 am to 12:00 pm Saturday, September 5, 2020 at New Bethel Missionary Baptist Church in Cape Girardeau. Funeral service will follow at 12:00 pm Saturday at the church with the Rev. Joseph Cotton Jr. officiating. Burial will be at Lorimier Cemetery in Cape Girardeau. Memorial contributions may be given to St. Francis Hospice. Online condolences may be made at www.fordandsonsfuneralhome.com. Ford and Sons Funeral Home - Mt. Auburn is in charge of arrangements.

Lillian Jean Wynne, 87, of Cape Girardeau, Missouri was called to her heavenly home on Monday, August 31, 2020 surrounded by her loving family. She was born March 13, 1933 in Steele, Missouri, She was the fifth oldest child of Willie and Hattie... View Obituary & Service Information

The family of Lillian Wynne created this Life Tributes page to make it easy to share your memories.

Send flowers to the Wynne family.