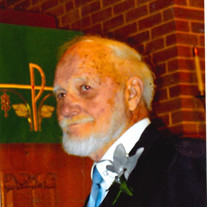 Lester Thomas Sladek, Sr. of Oak Ridge, MO, passed away September 8, 2021. He was born in St. Louis, MO, September 29, 1928 to Lester and Marie Dulin Sladek, the second of two sons. He married Joan Marion Truska in East St. Louis, IL, on July 17, 1954, and despite her passing in 1997, she remained the love of his life until his final breath. In his youth, his love for guns began when he was part of the high school rifle team. He remained an avid gun enthusiast all his life. He also enjoyed competitive speed skating and cycling in his younger years. He also enjoyed dirt car racing and was an old school street outlaw. Throughout his life he owned many muscle cars. His prize cars were his 1948 Ford convertible, his 1968 Shelby GT350 and his most recent love was his 2013 GT Premium Mustang which was tuned to his liking which he proudly drove every day until his last. His love of cars was paralleled with over 80 years of dedication to his craft of creativity and design. He specialized in hand lettered signs and fiberglass fabrication, among his many other talents. He worked for Kern Sign Company, Herb’s Hot Rod Shop, McDonnell Douglas, Ford Motor Company, General Sign, Marquette Tool and Die, and his self-owned L & J Fiberglass and Cobra Fiberglass companies where he produced go-kart and Mustang and Shelby parts. His craftsmanship has been sought out and is world renowned. Upon selling Cobra Fiberglass to his son, he returned to his early love of firearms and began designing and making custom gun stocks and pistol grips, many of which he hand checkered. On the day of his passing, he spent his time doing some of his favorite things: driving his car, hand-crafting a gunstock, and working in the shop. Survivors include seven children, Pauline Niswonger, Susan (Dale) Weisbrod, Charles (girlfriend, Alejandrina) Sladek, Marie (the late Arnold) Vitek, Lester (Dyuna) Sladek, Jr., Thomas (Tammy) Sladek, and Elizabeth Sladek. Along with 15 grandchildren, 25 great grandchildren, two great-great grandchildren, and four on the way. In addition to his wife, he was preceded in death by his parents and his brother, Charles Edward Sladek. Visitation will be 9:00 am to 11:00 am on Friday at Ford and Sons Funeral Home in Jackson. A celebration of life will follow at 11:00 am at the funeral home with Pastor Chris Peltz officiating. Burial will be in Russell Heights Cemetery next to his late wife immediately following. Memorial contributions may be made to the American Cancer Society, Crossroad Church in Jackson or the charity of your choice. Ford and Sons Funeral Home in Jackson is in charge of arrangements. Online condolences may be made at www.fordandsonsfuneralhome.com .

The family of Lester T Sladek Sr. created this Life Tributes page to make it easy to share your memories.

Send flowers to the Sladek family.