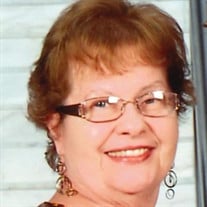 Carolyn Lea Hecht, 82, of Cape Girardeau died peacefully in her sleep on February 9 at her daughter's home in Marble Hill. She was born in Terre Haute, Indiana on September 25, 1939 to Inscoe Byrl Jarrett and Cleda Evelyn King Jarrett. After the family moved through several small towns in Southern Illinois, they settled in Princeton, Indiana where she graduated from high school in 1957. She went to then all female William Woods Junior College. After becoming the first female to take a class at Westminster Junior College, she graduated from William Woods with an Associate of Arts in 1959. Moving to the University of Missouri, she fell in love with singing in the University Singers, and graduated with B. S. in Education in 1961. She then taught 4th grade at Grandview Elementary School for two years, during which she met Harvey Hecht, whom she married on August 4, 1962. Moving to Knoxville, Tennessee in 1963, where Harvey was pursuing graduate work, she taught in various schools before the birth of their son, Matthew Gregory, May 29, 1966 and their daughter Laura Michelle, February 22, 1969. After the family moved to Cape Girardeau in the fall of 1969, she spent years in Cub Scout and Girl Scout work, served as Director of Pre School at Westminster Presbyterian Church, completed a Masters degree in English at the University of Tennessee, and became an Instructor at Southeast Missouri State University. During her 32 years there she taught composition and literature, but most of her work was in the Writing Center where she tirelessly worked with students ranging from freshmen to graduate students, including a future department chair at Southeast. She was an original member of the group of scorers for the Writing Proficiency Exam. For several years she scored writing samples for the College Board SAT exams in Princeton, New Jersey, occasionally catching a play at the New York theatres nearby. One of her greatest experiences was living in London and traveling throughout Europe while Harvey taught in the Missouri London Program two different semesters. Matt and Laura were able to join them for a month. She enjoyed all sorts of games, board and card, but was happiest at a bridge table. A big baseball fan, she and Harvey made frequent trips to Kansas City and St Louis to see the Royals and Cardinals play. In football she cheered for the Universities of Missouri and Tennessee. She helped organize Southeast's English faculty's caroling students between classes during final exam week. She convinced Harvey to join her in several choirs, most recently at First Presbyterian and Southeast Missouri State's Choral Union before physical problems forced her to quit. With a Choral Union tour, she sang in Rome, Venice, Vienna, and a Sunday service at The Duomo in Florence. With other choral groups, she and Harvey sang at the Kennedy Center in Washington D.C. and at the National Fourth of July Celebration. Summer frequently found her and Harvey in their beloved Maine. For the last few years in the fall, they spent a month enjoying the beautiful beach at Okaloosa Island, Florida with friends and family. In retirement, she and Harvey enjoyed several cruises. Favorite stops were Paris, Monet's Garden, Normandy, Omaha Beach, Santorini, Malta, Mykonos, and the Acropolis. She was preceded in death by her parents and a son, John Carl Hecht. She is survived by Harvey, a son Matthew Gregory (a twin with John Carl), a daughter Laura Michelle Emmons, three grandsons (Troy Emmons, Adam Brown, and Justin Brown), a grand daughter Abigail Emmons, a great grandson Landon Brown, a great granddaughter Reagan Brown, and numerous nephews and nieces. In lieu of flowers the family suggests contributions to First Presbyterian Church of Cape Girardeau, Westminster Presbyterian Church of Cape Girardeau, or the Southeast Cancer Center. Friends may call 4:00 pm to 6:00 pm on Friday, February 18, 2022 at Ford & Sons Mt. Auburn Chapel in Cape Girardeau. A memorial service will be at 11:00 am Saturday, February 19, 2022 at First Presbyterian Church in Cape Girardeau with the Rev. Ellen Gurnon officiating. Memorial contributions may be given to First Presbyterian Church of Cape Girardeau, Westminster Presbyterian Church of Cape Girardeau or Southeast Cancer Center. Online condolences may be made at www.fordandsonsfuneralhome.com.

Carolyn Lea Hecht, 82, of Cape Girardeau died peacefully in her sleep on February 9 at her daughter's home in Marble Hill. She was born in Terre Haute, Indiana on September 25, 1939 to Inscoe Byrl Jarrett and Cleda Evelyn King Jarrett.... View Obituary & Service Information

The family of Lea Hecht created this Life Tributes page to make it easy to share your memories.

Carolyn Lea Hecht, 82, of Cape Girardeau died peacefully in her...

Send flowers to the Hecht family.