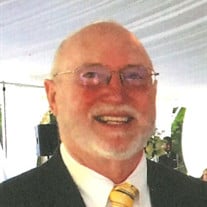 Dr. Lawrence Taylor Bahn, 69, passed away peacefully at his home, Taylor Oaks, in Cape Girardeau on Monday, May 17. He was born on September 18, 1951 in Cape Girardeau, and attended the Campus School, graduating from Cape Central High School in 1969. A talented cello player, Taylor played with the community orchestra while still in high school. Taylor was an Eagle Scout with Troop 3 and a member of Order of the Arrow. He graduated from Southeast Missouri State College with a B.S. degree in Chemistry. Dr. Bill Kane is quoted as saying that Taylor Bahn was the smartest guy in McGill Hall. He continued his education with a Masters degree in Biochemistry from the University of Memphis, and attained his DDS degree from the University of Missouri-Kansas City Dental School. Dr. Bahn went on to complete a Residency in Periodontics at the Louisiana State University-New Orleans. There were a few jokes at this point about Taylor being a professional student. He practiced Periodontics in Cape Girardeau for 33 years while being the only periodontist between St. Louis and Memphis for most of that time. While in Memphis Taylor began playing rugby at the center and winger positions with the Old No. 7 Rugby Club and also played on the Kansas City Rugby Club, where he made and maintained many lasting friendships. Two of his friends and their families later formed the 'Alpha Dog' Ski Team with Taylor and his crew. Taylor married Nancy Jo Wilson of Harviell, Missouri in 1982, and began practicing periodontics in 1984. He was raised as a Presbyterian, but became a member of Cape La Croix United Methodist Church, and enjoyed Bible Study with friends at Centenary UMC. He was a devoted and loving husband, father, and grandfather to his family, and a good friend to many others. Taylor was a gentle spirit, a kind man with a congenial personality while possessing good humor and a dry wit. He was good cook and perfected his world famous seafood gumbo recipe. Taylor enjoyed duck hunting and training the family's retrievers, Buck and Suzy; he also liked canoeing, camping, taking care of the family farm, and other outdoor activities. Taylor was an avid sports enthusiast for all sports on the television and in person. He served as Scout Leader for son Jackson's Troop 5 Boy Scout Patrol. He also enjoyed dance recitals, the swim meets, and all his children's high school activities, among them being Carsen's tennis team matches. Taylor was active with coaching all three children's recreational soccer teams, and Caitlin's traveling U-15 Girls' Sabres Soccer Team to a first place finish in the Missouri Kellogg Bowl. Dr. Bahn was a member of the American Academy of Periodontology, attaining his Diplomat Status, the Missouri Dental Association, the Southeast Dental Society, serving as president; and the local Implant Study Club. He judged the Regional High School Science Fair annually, and was pleased to give the Bahn Award to many outstanding Science Fair winners. Taylor is survived by his wife, Nancy, and their children, Caitlin Rebecca Bahn (Kirtley) Weitzel of Belle Isle, Florida; Jackson Taylor (Samantha) Bahn of Salida, Colorado, and Dr. Agnes Carsen Eileen Bahn of Cheyenne, Wyoming; two grandchildren, Beya Lane and Raphael Grimm Bahn; a brother, William (Janna) Bahn, of Santé Fe, New Mexico, and numerous cousins, other relatives and friends from near and far. He was preceded in death by his parents, Dr. E. Lawrence and Leta Lewis Bahn, and uncles and aunts. Thank you to all our friends and family who have been praying for Taylor and offering words of support, which has made this trial lighter. Taylor maintained his good humor to the end and was without complaint. We think of Taylor in heaven laughing with his parents and good friends, Drs. David Crowe and Robert Leyen. We shall miss him. Visitation will be 10:00am to 12:00pm Saturday at Centenary United Methodist Church, 300 N. Ellis, Cape Girardeau, MO. Funeral service will follow at 12:00pm Saturday at the church. In lieu of flowers, the family requests that donation may be made to The Tailor Institute for Autism or to a charity of their choice. Ford and Sons Funeral Home in Cape Girardeau is in charge of arrangements. Online condolences may be made at www.fordandsonsfuneralhome.com.

Dr. Lawrence Taylor Bahn, 69, passed away peacefully at his home, Taylor Oaks, in Cape Girardeau on Monday, May 17. He was born on September 18, 1951 in Cape Girardeau, and attended the Campus School, graduating from Cape Central High School... View Obituary & Service Information

The family of Lawrence Taylor Bahn created this Life Tributes page to make it easy to share your memories.

Dr. Lawrence Taylor Bahn, 69, passed away peacefully at his home,...

Send flowers to the Bahn family.