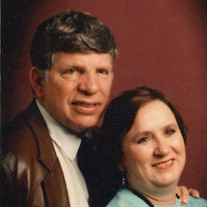 Larry Gene Phillips, 89, of Maryville, Illinois passed away Tuesday, January 18, 2022 at Anderson Hospital in Maryville. Eighteen hours later, his wife of 61 years, Wilma Jean Phillips also passed away at Anderson Hospital in Maryville. Larry was born November 26, 1932 in Stoddard County, Missouri to Otis and Gladys (Mayo) Phillips. Wilma was born May 2, 1943 in Cape Girardeau, Missouri and was adopted by Philip and Esther (McCauley) Leible. Larry served in the U.S Army from 1953 until 1955. He worked for Swift Independent Packing Company for 24 years, then in the security field until retirement age. Wilma had several part-time and full-time vocations over the years but was primarily a homemaker for her husband and 5 children. She was a member of Mother of Perpetual Help Church in Maryville. Larry and Wilma were both graduates from Central High School in Cape Girardeau. They were married October 15, 1960 in Cape Girardeau. They are survived by their children; daughter, Denise (James) Strang of Tucson, Arizona; sons, Brian Phillips of Zephyr Hills, Florida and Bobby (Karyn) Phillips of Maryville, Illinois; daughter, Billie Phillips of Collinsville, Illinois; Larry's siblings, Shirley Blythe of Denver, Colorado; Connie Louden of Texas; and David Phillips of Grady, Arkansas. Wilma's sibling's Joe Ruch of Apache Junction, Arizona and Rosemary Leible; grandchildren, Steven, Lauryn, Robert, and Nathan Phillips; great-grandchildren, Amelia and Camdyn Phillips. They were preceded in death by their parents and their son, Kristopher; Larry's brother Robert Phillips and sisters, Carol Schmidt and Rebecca Smith; Wilma's brothers, Richard Leible and Frank Ruch. Visitation for both Larry and Wilma will be Monday, January 24, 2022 from 11:00 a.m. until noon at Ford and Sons Mt. Auburn Chapel. Their funeral service will follow at noon at the funeral home. Private burial will take place at Cape County Memorial Park Cemetery. Memorial contributions may be given to Disabled American Veterans (DAV.org).

The family of Larry and Wilma Phillips created this Life Tributes page to make it easy to share your memories.

Send flowers to the Phillips family.