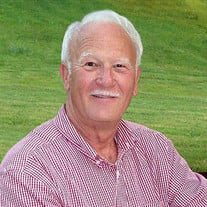 LaRoy R. "Mickey" Roper, Jr., 77, native son of Cape Girardeau, went home to the arms of his Savior Jesus Christ on Monday, August 24, 2020 after a valiant battle with COVID-19. Mick was born January 15, 1943 in Cape Girardeau, Missouri to LaRoy and Leone Roper, Sr., who preceded him in death. Mick and Susan Campbell were married August 23, 1964 and enjoyed a loving marriage for 56 years. Mickey graduated from Cape Central High School and Westminster College and was the President of United Service Stations and United Distributing Company for over 25 years. During that time, he served in numerous community leadership roles, was a longtime committed member of Rotary Club, and served on the board of Saint Francis Medical Center for 35 years. God changed the course of his life in the early 90's, when he graduated from Covenant Seminary with a degree in Biblical Counseling. Mick and his wife Susan went on to counsel many with the love of Christ for well over a decade. He loved to work and serve others, was a lover of people, and adored his family. Loving survivors include his wife, Susan C. Roper; daughters, Reagan (Roger) McNeil of Jonesboro, Arkansas, Shannon (Michael) Howard of Scott AF Base, Illinois, and Rachel (Jim) Maynard of Denver, Colorado; son, LaRoy (Christi) Roper III of Nashville, Tennessee; sister, Judy (Rock) Wilferth of Cape Girardeau; grandchildren, Jackson (Kendall), Emma, and Mac McNeil; Walker (Mack) Chrisman and Mike Howard Jr.; Lucy and Molly Maynard; Grace, Josh, Caleb, and Ellie Roper. Honorary pallbearers are brother-in-law, Rock Wilferth and dear friends,Tim Young, Lewis Bock, Scott Coleman, Howard Eyrich, Kermit Hughey, Art Hunt, Dave Newton, Danny Reece, Dr. Allen Spitler and Gary Spradling. There will be a private family service to worship our Father and celebrate Mickey's life later this week. Burial will be at Cape County Memorial Park Cemetery in Cape Girardeau. In lieu of flowers, memorials may be offered to his church, the Gospel Life of Jackson (502 W. Main St., Jackson, MO 63755), and to One City Community Center (which serves Cape Girardeau from the site of his former business at 610 Independence, Cape Girardeau, MO 63701). Our only hope in life and in death is our living hope, Christ Jesus. As we grieve, we thank God for his life… everlasting. Ford and Sons Funeral Home is in charge of arrangements.

The family of LaRoy R. "Mickey" Roper Jr. created this Life Tributes page to make it easy to share your memories.

Send flowers to the Roper family.