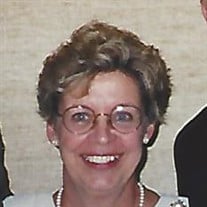 Karen Clausine Liffengren, 79, of Cape Girardeau died Saturday, Nov. 28 at Southeast Missouri Hospital. She was born October 29, 1941 in Mason City, Iowa to Norman and Loretta Miller Kjome. She married Tom Tingwall in 1961 in Peoria, IL. He preceded her in death in November of 1974. She married Alan Liffengren in 1977 in Peoria, IL. He preceded her in death on December of 2015. Karen was of the Catholic faith and was raised in Austin, Minnesota. She enjoyed arts and crafts and liked to paint. She collected antiques and loved traveling and reading. She loved spending time with her grandchildren and was an avid Minnesota Vikings fan, Anglophile and a coffee lover. Survivors include son, David Tingwall of DeSoto, MO., son, Dan Tingwall of Peoria, IL., daughter, Lori (Mark) Lee of Chicago, IL., and son, Randy (Dana) Tingwall of Benton, MO., sister-in-law, Bonnie Espy Kjome of Austin, MN., and grandchildren Anna Lee, Katherine Lee, and Brayden Tingwall. Also surviving are numerous nieces and nephews. She was preceded in death by her parents, husband, brother Norm E. Kjome, sister, Carol Ann Brady and brother-in-law Jake Brady. Be kind to one another, love someone a little bit deeper, hug someone a little bit longer and live life like you're not afraid of dying. Be generous with smiles and always share a hug. There are no services planned at this time. Memorials may be given to the American Cancer Society. Online condolences may be sent to www.fordandsonsfuneralhome.com. Ford and Sons Funeral Home - Mt. Auburn is in charge of arrangements.

The family of Karen Clausine Liffengren created this Life Tributes page to make it easy to share your memories.

Send flowers to the Liffengren family.