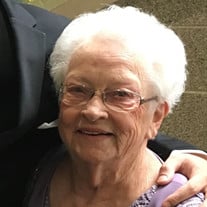 Juvita June Hunt, 87, formerly of Scott City, Missouri, died Saturday, April 17, 2021 at the home of her daughter in Tallahassee, Florida. She was born June 1, 1933 in Cape Girardeau, Missouri to Charley and Elizabeth Schuette Davie. She was a graduate of College High. She and Herschel Lee Hunt were married December 27, 1952 in Cape Girardeau, Missouri. He preceded her in death on September 10, 2020. She raised her family in Sikeston, Missouri and was an active member of Sikeston First Assembly of God Church. She and her family later moved to Scott City, Missouri where she attended Cornerstone Church. She was a beloved member of the Scott City Quilters. These ladies were dear friends and great Christian women. Survivors include a daughter, Brenda Hunt Powers (Michael) of Tallahassee, Florida; three grandchildren, Lacey (Brett) Frank of Panama City, Florida, Currie Powers of Lake City, Florida and Jonathan (Nicole) Hitt of Beavercreek, Ohio; and two great grandsons, Landon Frank and Braylen Frank, both of Panama City, Florida; and one sister, Betty Dillinger of Jackson, Missouri. She was preceded in death by her husband, Herschel Lee Hunt; daughter, Debra Hunt Hitt; infant son, Charles Hunt; brothers, Alvin Davie, James Davie and Edward Davie; sisters, Loretta Musgraves and Geneva Wilkinson. Visitation will be at 10:00 am to 11:00 am May 8, 2021 at Ford and Sons Mt Auburn Chapel in Cape Girardeau, Missouri. Funeral Service will follow at 11:00 am Saturday at the funeral home with the Rev. Stephen Clardy officiating. In lieu of flowers, memorial contributions can be made to the Scott City Quilting Ladies, P.O. Box 301, Kelso, Missouri 63758. Online condolences may be made at www.fordandsonsfuneralhome.com. Ford and Sons Funeral Home - Mt. Auburn is in charge of arrangements.

Juvita June Hunt, 87, formerly of Scott City, Missouri, died Saturday, April 17, 2021 at the home of her daughter in Tallahassee, Florida. She was born June 1, 1933 in Cape Girardeau, Missouri to Charley and Elizabeth Schuette Davie. She was... View Obituary & Service Information

The family of Juvita June Hunt created this Life Tributes page to make it easy to share your memories.

Send flowers to the Hunt family.