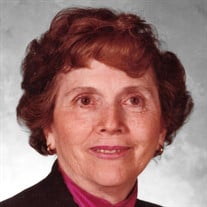 June E. Mahy, 98, of Cape Girardeau, died of natural causes, Tuesday, December 22, 2020, in San Diego, CA. She was born June 24, 1922 in Cape Girardeau, daughter of Emma Perry Farrow, and George E. Farrow. At the age of 19, June graduated from the Normal School, with a 2-year teaching certificate and taught grades 1-8 at the Old Egypt Mills School. Farrow married Joseph Ralph Mahy, February 21, 1944. They owned and operated Mahy's Grocery Store on Sprigg Street, for 17 years. In 1966, she returned to Southeast Missouri State University for her 4-year teaching certificate, and then taught 5th grade at Nell Holcomb School until she retired in 1984. She touched the lives of many local students and families during her teaching career. June was also a longtime member of Centenary United Methodist Church and a founding member of SEMO's Copper Dome Society. In 2015, she moved to San Diego, CA to be closer to family. Survivors include her two daughters, Martha Warhurst of San Diego, CA and Judy Schiffrin of Bloomington, IN; sister, Betty Ward of Murphysboro, IL; brother, Russell Farrow of Cape Girardeau; eight grandchildren. She was preceded in death by her parents and her husband. A private family memorial service will be held at a later date.

The family of June E. Mahy created this Life Tributes page to make it easy to share your memories.

Send flowers to the Mahy family.