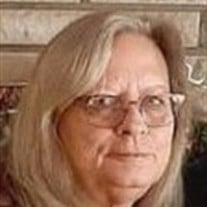 Julie Mae Parmer, 62, of Cape Girardeau lost her short battle with cancer Thursday, July 29, 2021, at her home surrounded by loved ones. She was born February 5, 1959, in Cape Girardeau to Gene Jones and Murtice Rhodes Propst. She and Doyle Eugene Parmer were united in marriage on June 6, 1978, in Cape Girardeau. He survives of the home. Julie attended Central High School in Cape Girardeau and got her GED in 1977. She worked with Head Start in Cape Girardeau for several years, was owner of Dutch Clean for 40 years, was a caregiver and owned Begin Again Consignment Shop in Dutchtown. She was a member of St. Mary's Cathedral in Cape Girardeau. Julie was a wonderful and devoted mother and Nana. She was a hard-working, dependable, honest, kind and caring devoted Christian. She was an amazing role model and mother to anyone that knew her. She enjoyed coaching her daughters in softball and continued watching her grandchildren play. She was also an amazing and devoted Girl Scout leader. Survivors include two daughters, Christna (Darren) Riegert of Gordonville, Missouri, and Mindy (Ivan) Lemons of Cape Girardeau; four grandchildren who lovingly called her Nana, Grace and Cole Lemons and Breanna Williams all of Cape Girardeau and Dalton Riegert, Gordonville, Missouri; two sisters, Emma (Fines) McAlister, Chaffee, Missouri and Debbie Kircher, Cape Girardeau; and one brother Steve (Donna) Jones, Chaffee. She is also survived by several nieces and nephews and her beloved dog Talon. Julie was preceded in death by her father, mother and a brother, Bobby Jones. Visitation will be Monday, Aug. 2, 2021, from 10 am to 12 pm at Ford and Sons Mt. Auburn Funeral Home in Cape Girardeau. Funeral service will be Monday at 12 pm at the funeral home with Father Allan officiating. Entombment will be at Cape County Memorial Park Mausoleum in Cape Girardeau. In lieu of flowers memorials may be sent to Southeast Hospice in Cape Girardeau.

Julie Mae Parmer, 62, of Cape Girardeau lost her short battle with cancer Thursday, July 29, 2021, at her home surrounded by loved ones. She was born February 5, 1959, in Cape Girardeau to Gene Jones and Murtice Rhodes Propst. She and Doyle... View Obituary & Service Information

The family of Julie Parmer created this Life Tributes page to make it easy to share your memories.

Send flowers to the Parmer family.