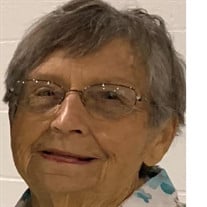 Judith Diane Scherer, 83, of Scott City, Missouri died Saturday, April 30, 2022 at Chaffee Nursing Home. She was born September 3, 1938 in Benton, MO to Paul C. and Cleta G. Kirby Pattengill. She and Vernon "Sheenie" Scherer were married August 15, 1959 in Benton, Missouri. He passed away May 31, 2018. She was a member of the First Baptist Church in Benton where she played the piano, was Bible school and Sunday school teacher for many years before converting to the Catholic faith and joining St. Denis Parish in Benton, Missouri. Judy worked several years at The Democrat Advertiser before working her dream job as the manager of the greenhouse at Diebold Orchard in Benton for over 30 years. She had many loyal customers that she gave gardening advice to that also became lifelong friends. She was a member of the Benton Extension Club, Red Hat Society, Master Gardener and Honorary member of the Kelly FFA. She enjoyed anything that had to do with flowers and it was apparent if you saw her flower gardens anywhere she lived. She was an avid junker and loved antiques which was evident by the many "treasures" she owned. Survivors include two sons, Chris L. (Donna) Scherer of Kelso, Missouri, Jeff A. (Tina) Scherer of Benton, Missouri; two daughters, Nancy A. (Bill) Williams of Jackson, Missouri, Julie E. (Bobby) Schott of Benton, Missouri; seven grandchildren, Megan Kerns, Dustin LeGrand, Kaylee Scherer, Kenzie Scherer, Christina Scherer, John Scherer, Paul Scherer; three great-grandchildren, Baylie Kerns, Kora Kerns, Bennett LeGrand; brother, Gary L. (Lorna) Pattengill of Laguna Beach, California; two sisters, Melissa A. Schiwitz of Scott City, Missouri, Beverly J.(Ken) Johnson of Cape Girardeau, Missouri; brother-in-Law, Bob (Ann) Scherer of Venice, Florida; sister-in-law, Libby Scherer of Cape Girardeau, MO. She was preceded in death by her parents; husband; three grandchildren, Allen, Benjamin and Baby Schott; and great-grandchild, Emery LeGrand. Visitation will be from 4:00 pm to 8:00 pm on Wednesday, May 4, 2022 at Ford & Sons Benton Chapel in Benton, Missouri. Funeral Mass will be Thursday, May 5, 2022 at 10:00 am at St. Denis Catholic Church in Benton, Missouri with Monsignor Normand Varone officiating. Burial will be at St. Denis Church Cemetery in Benton, Missouri. Memorial contributions may be given to Kelly High School FFA Chapter for the enrichment of the greenhouse program. Ford & Sons Funeral Home is in charge of arrangements.

The family of Judith Diane Scherer created this Life Tributes page to make it easy to share your memories.

Send flowers to the Scherer family.