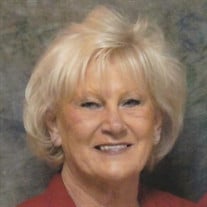 Judith Anne “Judy” Lang, 71, of Whitewater (formerly Cape Girardeau), died Friday, July 3, 2020 at her home. She was born July 1, 1949 in Chicago, IL, to Peter Jenkins and Ruth Dragunas Jenkins. She and Roger Warren Lang were married on October 4, 1997. Judy graduated from Prospect High School in Mt. Prospect, IL. On September 17, 1977, she married her first husband, Philip Ventrella, who passed away in 1992. She and Phil relocated to Cape Girardeau, and had one daughter, Vicki Ventrella-Meyer. Judy had a talent for sewing and needlecraft and made custom draperies for most of her life. She was also employed at various businesses: First Federal Bank, Otahki Girl Scout Council, Famous Barr, and RM Coco, among others. Retail ran in her blood, and for approximately six years, she owned and operated Judith Anne’s Gift Shop in downtown Cape. When her store closed in 2001, she joined Roger at Lang’s Jewelers until their retirement in 2013. Judy was the original board president and one of the founders of the Old Town Cape organization, and a proud member of the Downtown Merchants’ Association. She created and designed the first annual downtown Cape ornament. Judy enjoyed golf, fishing, her Bunko group, and volunteered at the Cape Girardeau Conservation Nature Center. She was a member of the Elks, and participated at both the Jackson and Cape lodges. Judy was incredibly creative, and a thoughtful, doting mother and grandmother. She was strong and driven, but she cared deeply for her friends and family. Judy is survived by her husband Roger, daughter Vicki (Clint Meyer) of St. Ann, MO, granddaughter Aubrey Meyer, stepdaughter Erika Lang of Cape, sister Barb Josetti of Denver, CO, and numerous nieces and nephews. She was preceded in death by her parents, first husband Phil, and brother, Richard Jenkins. Visitation will be Thursday, July 9, from 5 to 7 p.m. at Ford and Sons Mt. Auburn Chapel. Please wear a mask if attending. A graveside service will be held Friday, July 10, at 10 a.m. at Memorial Park Cemetery with Rev. Stan Hargis officiating. Memorial contributions may be made to the Missouri Conservation Heritage Foundation; please memo “Cape Nature Center” to ensure the contribution reaches the appropriate organization. Ford and Sons Funeral Home is in charge of arrangements.

The family of Judith Anne Lang created this Life Tributes page to make it easy to share your memories.

Send flowers to the Lang family.