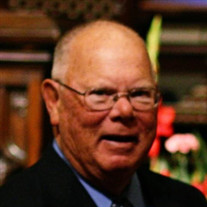 Joseph Carl Miller Jr., 74, formerly of Cape Girardeau, MO, passed away peacefully on Saturday, November 14, in Frisco, Texas, after battling Parkinson’s disease for many years. He was born October 3, 1946 in Cape Girardeau, MO to Carl Miller and Helen Catherine Brugger. He and Saundra Jo Eggers were married June 5, 1971 at St. Vincent Catholic Church in Cape Girardeau. Joe served in the U.S. Army for two years; 18 months of that was spent in Germany. He graduated from Cape Central in 1964 and went on to earn an AA Degree in Computer Science and a BA Degree in Marketing from Southeast Missouri State University. He was an avid golfer, hunter and fisherman. He enjoyed a good game of "hand and foot" and poker with friends and family. He loved his family and his faith. Joe spent his entire career at Shell Oil Company in sales and marketing. While working, he and his family lived in St. Louis, Houston, Nashville and Atlanta. After Joe’s retirement, he and Sandi moved to Granbury, Texas, where they spent 7 years, before moving back to Sandi’s family farm in Jackson, Missouri. Joe enjoyed his time there fishing, hunting, golfing, and time with family. Five years ago, they moved back to Texas, to be closer to their daughters and grandchildren. Survivors include his wife, Saundra Jo Miller of Frisco, Texas; two daughters, Heather (Scott) Crow of Leander, Texas and Becca (Don) Stutsman of Frisco, Texas; four grandchildren, Audrey and Colin Crow of Leander, Texas and Laine and Emily Stutsman of Frisco, Texas; three sisters, Mary Helen (the late Kenneth) Smith of Herculaneum, Missouri, Debbie (Paul) Lappe of Cape Girardeau and Susie (Vernon) Pobst of Oran, Missouri; two brothers, Bob (the late Pamela) Miller of St. Louis, Missouri and John (Debbie) Miller of St. Louis, Missouri; and numerous nieces and nephews. He was preceded in death by his parents and brother, Larry Miller. A funeral mass will be held Friday, July 16, 2021 at Immaculate Conception Church with the Rev. Randy Tochtrop officiating. Burial will be at Cape County Memorial Park Cemetery in Cape Girardeau. Memorial contributions may be given to Immaculate Conception Church or Veterans Plaza Memorial Scholarship at Southeast Missouri State University.

The family of Joseph Carl Miller created this Life Tributes page to make it easy to share your memories.

Send flowers to the Miller family.