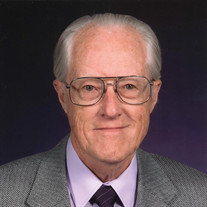 John Stanley Shelton, 89, of Cape Girardeau, died October 23, 2021, after a brief battle with cancer. He was born on January 21, 1932, in Murray, Kentucky, to Cora Jones Boyd and James William Shelton. John's musical ability was apparent at a young age. He began piano lessons at age 6 and was studying with a professor at Murray State Teachers College by age 10. He graduated from high school at age 16 to attend Murray State. John also studied organ in college and commuted to First Baptist Church of Paducah, Kentucky, to serve as organist for Choir Director Doyle Dumas, who became a lifelong friend. It was also in college that he met and began dating (Helen) Ann Chissom. He graduated from Murray State in 1952 at the age of 20 with Bachelors of Arts in Music Education and Music Performance. John obtained his Master of Music degree at the American Conservatory of Music in Chicago in 1953 and became the Minister of Music at First Baptist Church in Owensboro, Kentucky, Ann's hometown. He and Ann were married by her father at First Baptist Church on June 26, 1954. Their marriage of 52 years was filled with deep love, much laughter, and mutual respect until Ann's death in 2006. John earned his doctoral degree in music education at Peabody College, which has since been absorbed by Vanderbilt University. After a brief stint in Danville, Virginia, where John was the Organist/Minister of Music of First Baptist Church, he joined the music faculty at Southeast Missouri State University in 1962 and was the first member of the music faculty to hold a doctoral degree. In addition to teaching music education and piano, he was instrumental in establishing the Artist-Lecture Series held in Academic Hall, a prelude to the River Campus touring performances. John also helped to establish and was the first director of the Choral Union, a combined choir of SEMO students and community singers that still exists. Throughout his years in Cape Girardeau, he also directed many church choirs, serving one year at First Baptist, 25 years at Centenary United Methodist, and 3 years at First Christian. He retired from the university as a full professor in 1998 and continued to accompany performers, conduct choral groups, and perform flawlessly well into his eighties. John is predeceased by siblings Eugene Boyd and James, Fred, Dorothy, Mary Brandon, Frances, Charles, and William Shelton. He is survived by children Suzanne Shelton (Michael Sump), Elizabeth Shelton, and Brian Shelton (Penny), grandchildren Gabe, Jacob and Luke Shelton, and his loving companion of 13 years, Kathryn Vance. But his most enduring legacies are the performances in which he shared his extensive talent and the hundreds of music students and future educators he nurtured and mentored throughout his life. Visitation will be at Ford and Sons Funeral Home on Mt. Auburn from 4-7 pm Wednesday, Oct. 27. The service to honor John's life will be Thursday, Oct. 28, at 10:30 am at Centenary United Methodist Church. Those unable to attend may view the service, which will be streamed live at 10:30 a.m., by visiting In lieu of flowers, the family requests donations to The John and Ann Shelton Music Education Scholarship (Southeast Missouri University Foundation, One University Plaza MS7300); Centenary United Methodist Church Music Department (300 N. Ellis); or the United Way of Southeast Missouri (1417 D, N. Mt. Auburn Rd,). All are in Cape Girardeau, MO, 63701. Online condolences may be made at www.fordandsonsfuneralhome.com.

John Stanley Shelton, 89, of Cape Girardeau, died October 23, 2021, after a brief battle with cancer. He was born on January 21, 1932, in Murray, Kentucky, to Cora Jones Boyd and James William Shelton. John's musical ability was apparent at... View Obituary & Service Information

The family of John S. Shelton created this Life Tributes page to make it easy to share your memories.

Send flowers to the Shelton family.