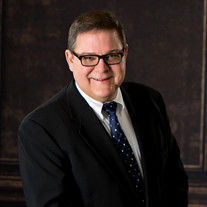 John Paul Heisserer, 64, died peacefully at home with his family by his side Thursday, August 5, 2021 after a courageous battle with cancer. John was born on December 3, 1956 in Cape Girardeau, Missouri to the late Glennon (Bud) and Frances Heisserer. John married Jerrie Gerlach on August 3, 2003 at St. Mary’s Cathedral in Cape Girardeau, Missouri. John graduated from Notre Dame Regional High School in Cape Girardeau in 1975. He then received a Bachelor of Arts in Political Science from Southeast Missouri State University in 1978. He continued his education and earned his Juris Doctorate in 1981 from Loyola University School of Law in New Orleans, Louisiana. While attending law school, he was a member and editor of the Loyola Law Review having authored both a case note and an article. John was admitted to the Missouri Bar on September 19, 1981. John joined the law firm of Rice, Spaeth, Summers & Heisserer as a partner in 1982. He was appointed as Circuit Judge of the 32nd Judicial Circuit comprised of Cape Girardeau, Perry and Bollinger counties in Missouri in 2003. During John’s tenure, he quickly established a reputation for impartiality and respect for the litigants and their attorneys appearing before him. With the exception of his time on the bench, John has had an active trial practice for over 40 years. He played a vital role in the implementation of the mediation processes in the 32nd Judicial Circuit. John provided extensive leadership and service to his profession. He served the 32nd Judicial Bar Association as Treasurer, Secretary, Vice President and President; he sat on the Child Support Guidelines Review Subcommittee (Family Court Committee, Jefferson City), and was a board member of the Association of Missouri Mediators Inc. John’s community involvement has been extensive. He is the immediate past treasurer of the Cape County Democratic Central Committee, and a member of the Missouri State Democratic Committee. John has provided service and leadership as a past board member of the Family Resource Center, Gibson Recovery Center, Scott County SB40 Board, and as past president and board member of Kenny Roger’s Children’s Center in Sikeston, Missouri. He also served as a board member for the Boys and Girls Club of Cape Girardeau. John’s faith has likewise formed a fundamental cornerstone of his character. He was an active member of his parish, St. Mary’s Cathedral. He is a member of Old St. Vincent’s Catholic Church and served as a lector and Eucharistic minister. John was a member and past president of the Church’s parish council. He also served as a member of the school boards of St. Mary’s Cathedral School and Notre Dame Regional High School. Survivors include his wife, Jerrie of Cape Girardeau; children, Jed Heisserer of Cape Girardeau, Tess (Webb) Heisserer Barringer of Chattanooga, Tenessee, Merritt (Gabe) Keys, Erin (Brandon) Holzum both of Cape Girardeau, and Sam Gerlach of Denver, Colorado; and five grandchildren who lovingly called him Johnny, Lucy and Palmer Holzum and Reid, Miller and Vida Keys; brothers: David (Patricia), Michael, Mark, Dan (Tanya); and sisters, Paula (Dennis) and Becky Heisserer as well as several nieces and nephews. John was preceded in death by his father and mother. Visitation will be 4:00 pm to 8:00 pm Sunday, August 8, 2021 at Ford and Sons Mt. Auburn Funeral Home in Cape Girardeau, with Knights of Columbus #1111 Rosary at 7:00 pm. Funeral Mass will be 10:00 am Monday, August 9, 2021 at Old St. Vincent’s Catholic Church in Cape Girardeau. A private burial will take place at Old Guardian Angel Church Cemetery in Oran, Missouri. In lieu of flowers, donations can be made to the Order of the Most Holy Trinity and of the Captives, P.O. Box 1828, Sykesville, MD 21784-1820 or St. Louis Children’s Hospital, PO Box 955423, St. Louis, MO 63195-5423. Ford & Sons Funeral Home in Cape Girardeau is in charge of arrangements. Online condolences may be made at www.fordandsonsfuneralhome.com.

John Paul Heisserer, 64, died peacefully at home with his family by his side Thursday, August 5, 2021 after a courageous battle with cancer. John was born on December 3, 1956 in Cape Girardeau, Missouri to the late Glennon (Bud) and Frances... View Obituary & Service Information

The family of John Paul Heisserer created this Life Tributes page to make it easy to share your memories.

John Paul Heisserer, 64, died peacefully at home with his family...

Send flowers to the Heisserer family.