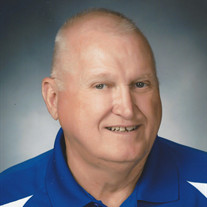 Jerry Wayne Grim, 76, of Cape Girardeau died Tuesday, May 3, 2022 at his home. He was born December 21, 1945 in Cape Girardeau, Missouri to Morton W. and Betty Jo Tanner Grim. He and Joann "Jody" Grim were married January 2, 1988 in Cape Girardeau. She preceded him in death September 2, 2020. Jerry served in the Army during the Vietnam War from 1964 to 1967. He graduated from high school in San Diego and received a bachelors degree from Southeast Missouri State University. His teaching career began at Puxico High School. He then taught art and civics at Notre Dame High School. He also served as a coach in a number of sports, including freshmen boys basketball, girls basketball, girls softball and golf. His girl's basketball teams made several state appearances and won the state championship in 2002; and the golf team also made it to state. Jerry received Coach of the Year twice for girls basketball and was named to the Missouri State Basketball Hall of Fame. He was also named to both the Athletic and PAVA Halls of Fame at Notre Dame Regional High School. He was a member of St. Mary Cathedral and Knights of Columbus Council 1111. Survivors include four children, Steve (Renee) Grim of Sedgewickville, Erin (Shannon Friedrich) Grim of Jackson, Jeff (Autumn) Grim of Jackson, and Brian (Sierra Shultz) Grim of Cape Girardeau; six grandchildren, Chelsey Welker, Brendan Wilkens, Dylan W. Grim, Addie Grim, Dylan M. Grim, and Carleigh Grim; sister, Sandy Boulanger of Las Vegas, Nevada; brother, Jon (Teraca) Grim of Frisco, Texas; and sister-in-law, Cindy Grim of Denver, Colorado. He was preceded in death by his parents, wife, and brother, Benji Grim. Visitation will be 4:00 pm to 8:00 pm on Friday, May 6, 2022 at Notre Dame Regional High School. Parish prayers will be at 7:00 pm with Knights of Columbus Rosary immediately following. Funeral Mass will be 10:00 am Saturday, May 7, 2022 at St. Mary Cathedral in Cape Girardeau with the Rev. Allan Saunders officiating. Interment will be at St. Mary Cemetery in Cape Girardeau with military rites by Missouri Honors Team. Memorial contributions may be given to Notre Dame Regional High School, St. Mary's Cathedral, or St. Ambrose Church. Online condolences may be made at www.fordandsonsfuneralhome.com. Ford & Sons Funeral Home is in charge of arrangements.

The family of Jerry Wayne Grim created this Life Tributes page to make it easy to share your memories.

Send flowers to the Grim family.