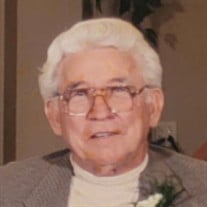 Jerry Eugene Dewrock, 86, of Cape Girardeau, Missouri passed away Friday, March 11, 2022. He was born December 8, 1935, in Cape Girardeau, Missouri to the late Emil and Pearl (Wright) Dewrock. He and Shirley Bazzell were married Sept. 27, 1952. Jerry worked at Central Packing House for 35 years and then the Craftsman Union for 15 years until his retirement. He couldn't stand to not be working, so he decided to get back to work and drive for Ford Groves, which lasted another 10 years. Jerry was an avid Cardinal baseball fan, loved his western shows and was instrumental in starting the Jr. Legion baseball team in Cape. He spent countless hours coaching kids in the Cape area and enjoyed every minute of it. He is survived by his wife, Shirley of Cape Girardeau; two sons, Gene (Michelle) Dewrock and Danny (Ann) Dewrock; six grandchildren, Danny (Amy) Dewrock, Jr., Danielle Dewrock-Driskell, Jared (Michelle Stewart) Dewrock, Amy (Ricky) Ogles, Amanda (Clinton) Walker, Tara Dewrock-Chasteen; 15 great grandchildren, 2 great-great grandchildren and one on the way in April. He was preceded in death by his parents; sisters, Emma Jean Terry and Virginia Westrich; brother, Emil Dewrock, Jr.; brothers-in-law, Larry Bazzell, Robert Bazzell and Donald Terry; nephews, Terry Dewrock, Rusty and Ronnie Bazzell; mother-in-law, Mealey Bazzell. Visitation will be Wednesday, March 16, 2022, from 11:00 a.m. until 2:00 p.m. at Ford and Sons Mt. Auburn Chapel. The funeral service will follow at 2:00 p.m. with Rev. Donny Ford officiating. Burial will be at Fairmont Cemetery. In lieu of flowers memorials may be given to St. Jude Children's Hospital or a charity of your choice.

The family of Jerry Eugene Dewrock created this Life Tributes page to make it easy to share your memories.

Send flowers to the Dewrock family.