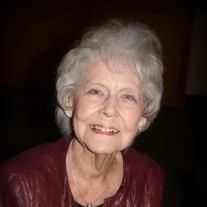 Jean Chapman Hogan, 93, of Cape Girardeau, Missouri went to be with her Lord, Friday, April 22, 2022 at Saint Francis Medical Center. She was born September 20, 1928 in Sikeston, Missouri to Jesse T. and Lora D. Kem Chapman. She graduated from Sikeston High School in 1946. She and Jack Hogan were married June 4, 1948 at Sikeston, Missouri. He preceded her in death on January 20, 1967. They lived in Sikeston, Bloomfield, Dexter and Charleston, before moving to Cape Girardeau in 1963. She was employed by Missouri Division of Employment Security for 16 years, retiring in 1988. She was a member of American Legion and VFW Auxiliary and Gold Star Mothers. She volunteered at Saint Francis Medical Center and Cape Girardeau Senior Center. She was a SEMO baseball fan. She was a member of Cape First Church in Cape Girardeau, where she was in the Joy Network. Survivors include two sons, Mark (Becky) Hogan of Cape Girardeau, Missouri and Kevin (Janet) Hogan of Jackson, Missouri; five grandchildren, Julie (Mitchell) Ogles of Cape Girardeau, Christie (Billy) Puckett of Cape Girardeau, Betsy (James) Brake of Cape Girardeau, Christopher (Sara) Hogan of Japan and Cory Hogan of Kansas City, Missouri; and five great-grandchildren, Chapman and Caroline Ogles, Hogan and Collins Puckett and Rebekah Brake. She was preceded in death by her parents; husband; a son, Bill Hogan, Jr.; and two sisters, Mary Crowe and Sue Crass. Memorial visitation will be 4:00 pm to 7:00 pm Wednesday, April 27, 2022 at Ford & Sons Mt. Auburn Chapel in Cape Girardeau. A private graveside service will be held at a later date at Garden of Memories in Sikeston, Missouri. In lieu of flowers, memorial contributions may be given to Avenue of Flags and Memorial Plaza, 1049 N. Kingshighway, Cape Girardeau, MO 63703. Online condolences may be made at www.fordandsonsfuneralhome.com. Ford & Sons Funeral Home - Mt. Auburn is in charge of arrangements.

The family of Jean C. Hogan created this Life Tributes page to make it easy to share your memories.

Jean Chapman Hogan, 93, of Cape Girardeau, Missouri went to be...

Send flowers to the Hogan family.