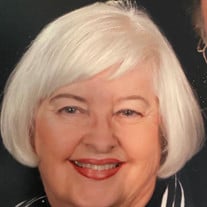 Janice Good Jones, wife, mother, grandmother, teacher and dear friend, died Wednesday, August 19th at Barnes Jewish Hospital in St. Louis. She was the daughter of J.C. and Ruth Good of Memphis, TN where she grew up. She graduated from Union University in Jackson, TN with a B.A. in Education. It was there that she met her future husband, Rev. Roy H. Jones, to whom she married in 1964. Janice started her career as a first-grade teacher in Louisville, Kentucky. From 1967-1970 she and her husband spent time in Nuremburg and Stuttgart, Germany where she taught children of American military personal. From 1971 to 1984 she lived in Evansville, Indiana and turned her focus to starting a family and raising her two children, Christopher Caleb and her daughter, Marla Ruth. During this time she led various PTA, church and community activities. After moving to Cape Girardeau with her family in 1984 she returned to her passion of teaching and developing young children by joining Head Start and later served on the board. When the opportunity arose to lead the establishment of a new grant program, Educare, to train preschool children’s teachers across the Cape Girardeau area Janice was thrilled to join. She was energized by the ability to make a bigger impact across the community and on more children’s lives. As an avid learner and passionate to incorporate new ideas, Janice returned to school at Southeast Missouri University and earned her Masters Degree in Education in 1998. After many years leading and expanding the mission of Educare, Janice retired to spend more time with her family and friends. She loved to travel, cook Southern food and was an avid gardener. Even in retirement she continued her love for educating others as a Missouri state consultant in early childhood working with preschools across the state. For over 20 years Janice served on the board of the Community Partnership of Southeast Missouri (formerly called Community Caring Council). Surviving in addition to her husband Roy Jones, are her son Christopher Jones and his wife, Michelle of Cape Girardeau along with her daughter, Marla Hamilton, of Dallas; her three beloved grandchildren Garrett Jones, Sophia Hamilton and James Hamilton; her brother Jimmy Good and his wife Gina. A memorial service will be held Tuesday, August 25, 2020 at Lynwood Baptist church with Rev. Mark Anderson officiating. Visitation will be from 9:30 to 11 am directly preceding the 11 am service. Burial will follow at Cape County Memorial Park Cemetery. Donations in her honor can be made to Community Partnership of Southeast Missouri at www.cpsemo.org.

Janice Good Jones, wife, mother, grandmother, teacher and dear friend, died Wednesday, August 19th at Barnes Jewish Hospital in St. Louis. She was the daughter of J.C. and Ruth Good of Memphis, TN where she grew up. She graduated from Union... View Obituary & Service Information

The family of Janice Good Jones created this Life Tributes page to make it easy to share your memories.

Send flowers to the Jones family.