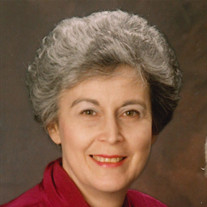 Janet Sue Werner, 78, of Cape Girardeau, passed away peacefully Saturday, September 26, 2020 at the Arbors at Auburn Creek after her final battle with Alzheimer's. She was born October 15, 1941, in Cape Girardeau, to the late Dewey and Virginia Keller. On August 5, 1962, she married the love of her life, Ronald Lee Werner, who survives. Janet received her undergraduate and master's degrees at Southeast Missouri State University in addition to her National Counseling Certification. She started her doctorate at SIU Carbondale, but was unable to complete due to Cushing's disease, which required brain surgery. She spent her career teaching and counseling at Chaffee, the former University Schools, SEMO University, St. Vincent's in Perryville and Notre Dame in Cape Girardeau. Janet enjoyed oil painting, ceramics and dried flower arranging; she was a long time member of the Cape Garden Club. Additionally, she was an avid bridge player and in her earlier days, enjoyed couples league bowling with her parents. Janet leaves behind her husband of 58 years; two daughters, Deborah (Robert) Bessette and Kimberly (Doug) Brown both of Gordonville, Missouri; her greatest joys, her grandchildren, Aric Holzbauer (girlfriend, Jessica Tuschhoff) and Morgan Berner (fiance, Zach Orrell) all of Cape Girardeau; her beloved sister, Nancy (Jack) Donovan of Bozeman, Montana; brother-in-law, Rick Werner (partner, Mike Thies); sister-in-law, Barbara (the late Robert) Werner all of Cape Girardeau; uncles, Roy (Eldora) Keller of Excelsior Springs, Missouri and Art (Patricia) Keller of Bella Vista, Arkansas; aunts, Jo Ann (the late Quentin) Keller of Springfield, Virginia and Mary Lou (the late Dave) Weygant of Florida; niece and nephew, Tracy (Dr. David) Bell of Arizona and Randall (Emily) Werner of Texas; and many cousins and friends. She was preceded in death by her parents; infant sister, Patricia; in-laws, Robert and Dora May Werner, Alvin Werner, Betty Werner-Metcalfe and Don Metcalfe, and uncles, Quentin, Irving and Layton Keller and Louie and Leon Whitler. There will be no services held at this time. The family ask memorials be made on her behalf to Southeast Hospice, 10 Doctors Park, Cape Girardeau, MO 63703. We wish to thank from the bottom of our hearts, the wonderful staff of Southeast Hospice and The Arbors of Auburn Creek. They made her life the best it could be during the past two months and always treated our family like their family; we could not have wished for anything better. Online condolences may be made at www.fordandsonsfuneralhome.com.

Janet Sue Werner, 78, of Cape Girardeau, passed away peacefully Saturday, September 26, 2020 at the Arbors at Auburn Creek after her final battle with Alzheimer's. She was born October 15, 1941, in Cape Girardeau, to the late Dewey and Virginia... View Obituary & Service Information

The family of Janet Sue Werner created this Life Tributes page to make it easy to share your memories.

Send flowers to the Werner family.