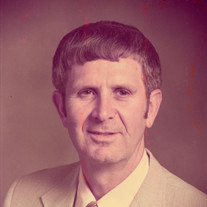 The family of James Oliver Goodin is sad to announce his sudden passing Wednesday, June 10, 2020. He slipped away peacefully, dozed off in his favorite armchair. It had been a good day, serenely lived: a favorite walk to the river and back, dinner with his lifelong sweetheart and wife Carolyn, a movie, followed by the traditional dozing off. "Jim" was born April 2, 1933 in Charleston Missouri to Oliver and Lucille Feezor Goodin. Always a kidder, the story goes that he played his first joke by pulling an April Fools on his parents - arriving a day late. He and Carolyn Abernathy were married February 25, 1955 at the family’s place of worship, Grace United Methodist Church in Cape. The couple had just celebrated their 65th wedding anniversary. A graduate of Charleston High School, he received his bachelor’s degree in physical education from Southeast Missouri State University. He was an All-Missouri basketball player and continued playing in the Army at Fort Leonard Wood. He loved to play tennis, train in the gym, ride his bike and walk to the riverfront, often times with the family who shared his same passions. Sometimes, you could hear of him working the barges on the Mississippi while walking side by side, or, around the firepit sipping good whiskey. He was a teacher and basketball coach at Shawnee High School, taught fitness and swimming at the YMCA in Decatur, Illinois and was Reginal Director of the American Red Cross. He became Electronics Department Manager at the former Famous-Barr, where you were always served with his own special brand of charisma. His legacy is a large family who adore him. Always the life of the party, no one could resist his infectious grin and giggle. Both he and Carolyn inspired their children and grandchildren to go for the dream - no matter what it was! He coached from the sidelines, agonized on the bleachers, cheered in theaters and was always ready with a word or a hug if you fell, then helped you back on your feet... Survivors include his wife, Carolyn A. Goodin; son, Col. (Ret.) Mike (Ivonne) Goodin; daughters, Robyn (David) Gross and Dana (Luigi) Vanoni; brother Oliver (Ann) Goodin; grandchildren, Danielle (Jacob) Toal, Samantha (Travis) Miller, Lainey, Erica, and Gabriel Goodin; great-grandchildren, Briar and Bennett Toal and Baker Miller; brother-in-law, Thomas Abernathy; and numerous nieces and nephews. He was preceded in death by his father, Oliver Goodin; mother, Lucille Goodin Sprague; and sister, Harriett Small. Memorial service will be 11:00 am June 27, 2020 at Grace United Methodist Church in Cape. Memorial contributions may be given to Humane Society of Southeast Missouri or Grace United Methodist Church. Online condolences may be made at www.fordandsonsfuneralhome.com.

The family of James Oliver Goodin is sad to announce his sudden passing Wednesday, June 10, 2020. He slipped away peacefully, dozed off in his favorite armchair. It had been a good day, serenely lived: a favorite walk to the river and back,... View Obituary & Service Information

The family of James Oliver Goodin created this Life Tributes page to make it easy to share your memories.

The family of James Oliver Goodin is sad to announce his sudden...

Send flowers to the Goodin family.