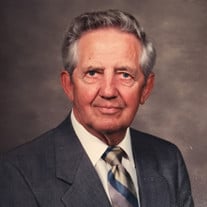 James "Jim" William Eaker, 100, of Pleasant Hill, Missouri passed away on Saturday, February 5, 2022, at the Bud and Donna Somers Hospice House in Sebring, Florida with his daughter, Lisa, at his bedside. He was born December 24, 1921, in Lutesville, Missouri to Glen and Furlie (James) Eaker. They were sharecroppers in Bollinger County, Missouri. The family moved every year and Jim went to seven different grade schools. He attended high school in Jackson, Missouri and quit after completing the 10th grade to help support the family. In July of 1942 he was drafted into the Army and served in Germany with the 311th Infantry Anti-Tank Company. He fought in the Battle of the Bulge at Remagen, Germany, one of the bloodiest battles of World War II. He served until 1946. He was married to Mary Alice Daugherty on December 13, 1943, in Durham, North Carolina, just prior to being deployed to Germany. She preceded him in death in 2008. After service he learned the carpenter trade using the GI Bill and soon struck out on his own. He built mostly custom residential homes in Cape Girardeau, Missouri. His company name was James Eaker Contractor, Inc. Jim loved sports of all kinds, but his passion was fishing. He and his long-time fishing partner, Arlie Smith, built a fishing house at Sardis Lake, Mississippi. Together, they fished Lake Sardis in Mississippi, and Lake Okeechobee in Florida for over 40 years. He was a member of Lynwood Baptist Church in Cape Girardeau and provided crappie fillets for their twice-yearly fish fries. In his later years he fished with his daughter, Lisa, on Lake of the Ozarks in Missouri and Lake Istokpoga in Sebring, Florida. Jim is survived by his daughter Lisa and son-in-law, Jim Watkins of Pleasant Hill, Missouri. Five grandchildren, Shawna Watkins (Mark), Jameson Watkins (Carla), David Wright (Dolly), Josh Watkins (Kayla) and Joel Watkins. Six Great Grandchildren, Jaden Riley, Lilya Wright, Owen Wright, Gage Watkins, Jack Watkins, and Asa Watkins. Visitation will be from 6:00 - 8:00 p.m. on Friday February 11, 2022, at Ford and Sons Mt. Auburn Chapel in Cape Girardeau. A graveside funeral service will be at 10:00 a.m. Saturday, February 12, 2022, at Cape County Memorial Park Cemetery in Cape Girardeau with the Rev. Mark Anderson officiating. Burial will be at Cape County Memorial Park Cemetery in Cape Girardeau. The family requests no flowers. Memorial contributions can be made to Southeast Missouri Food Bank, www.semofoodbank.org. Online condolences may be made at www.fordandsonsfuneralhome.com.

James "Jim" William Eaker, 100, of Pleasant Hill, Missouri passed away on Saturday, February 5, 2022, at the Bud and Donna Somers Hospice House in Sebring, Florida with his daughter, Lisa, at his bedside. He was born December 24, 1921, in Lutesville,... View Obituary & Service Information

The family of James "Jim" William Eaker created this Life Tributes page to make it easy to share your memories.

Send flowers to the Eaker family.