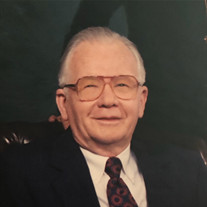 Jacob Peter "Pete" Pyeatte, 90, of Cape Girardeau, MO, passed peacefully from this life on July 11, 2020. Pete was born April 26, 1930 in Muskogee OK, to Ralph Pyeatte, a mortician, and Mabel (Hubbard) Pyeatte. Pete attended elementary through high school in Siloam Springs, AR. He receieved a BS from the University of Arkansas in Fayetteville. Pete married Linda Alexander in 1952. They had two sons, Jacob Peter Pyeatte, Jr and Sam Pyeatte. Pete graduated from mortuary school in Dallas, TX, in 1956. After his father's passing in 1957, Pete became the owner of Pyeatte Funeral Homes in Siloam Springs and Gravette, AR. Pete was a member of the Siloam Springs School Board for many years and served the community through his membership in a number of civic organizations. In 1984, Pete sold his interest in Pyeatte Funeral Home and retired. His first wife, Linda, passed away in 1987 after an extended illness. He married Patsy Eudy in 1995. They moved to Cape Girardeau in 1999. Patsy passed away in 2006 in Cape Girardeau. Pete was an avid sports fan. He loved the St. Louis Cardinals, Arkansas Razorbacks, and collegiate basketball. Survivors include four sons, Dr. Jacob Peter Pyeatte, Jr,. and wife Patti, of Cape Girardeau, Sam Pyeatte of Siloam Springs, Lonnie Eudy, and wife Michelle, of Siloam Springs and Dean Eudy of Arizona; three grandsons, Turner Eudy of Siloam Springs, Matt Pyeatte of Cape Girardeau and Jesse Pyeatte of St. Louis, MO; great-grandson, Jamison Pyeatte, and his mother, Sarah Pyeatte, of Cape Girardeau; and Molly, his beloved canine companion. Interment in Oak Hill Cemetery in Siloam Springs. A private family service will be held at a later date. Ford and Sons Funeral Home is in charge of arrangememts.

The family of Jacob Peter Pyeatte created this Life Tributes page to make it easy to share your memories.

Send flowers to the Pyeatte family.