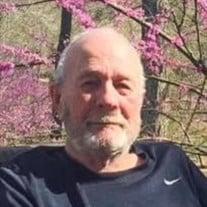 Hugo James William Wunderlich Jr., 86, of Burfordville, Missouri went home to be with his beloved Jesus, Saturday, August 14, 2021, at his home with his family by his side. He was born March 7, 1935, in New Wells, Missouri to Hugo Paul and... View Obituary & Service Information

The family of Hugo James William Wunderlich Jr. created this Life Tributes page to make it easy to share your memories.

Send flowers to the Wunderlich family.