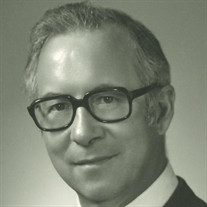 Hugo Gerhard Dippold, 98, died January 12, 2022, at the Lutheran Home. He was born October 14, 1923, to Reverend Leopold F. Dippold and Irma Griebel Dippold in Longtown, Missouri. He graduated from Jackson High School and was drafted into the U.S. Navy in 1944. He faithfully served in defense of his country in the South Pacific during WWII on AO22 USS Cimarron fleet oiler as a gunners mate, manning the 5 inch guns, and was honorably discharged in 1945. Hugo and Shirley Jean Sander were married November 9, 1944. Hugo was a successful businessman and a respected member of the community. He worked as office manager/comptroller for Mutual of Omaha in Cape Girardeau for 10 years. In 1971, he was employed by General Sign Company as Vice President/Comptroller. He was a member of the Cape Girardeau Kiwanis Club for over 50 years, serving as local club President among other leadership roles. He was a member of St. Andrew Lutheran Church for 63 years, serving numerous times on the Board of Directors and Board of Elders. He held many leadership positions at St. Andrew, including President of the Board of Directors. Hugo volunteered his accounting expertise, serving as St. Andrew Lutheran Church treasurer and as treasurer for FISH food pantry for many years. Hugo made many friends in the community, where he was loved for his witty sense of humor. Any restaurant or social engagement he attended, he was recognized and greeted by many. He was greatly respected for his honesty and work ethic. He will be missed by everyone that knew him. Survivors include; daughter, Ann (Ken) Green of Cape Girardeau; son, Robert Dippold of St. Louis; two granddaughters, Elizabeth (Jeremy) Driskell of Bloomington, IL, and Kelley (Jacob) Rogers of Columbia, MO; five great-grandchildren, Liam and Calista Driskell, and Luke, Natalie, and Emily Rogers; and a brother Edgar (Lee) Dippold of Kirkwood, MO. Hugo was preceded in death by Shirley, his wife of 76 years; his parents; two sisters, Evelyn Mueller and Irma Wilson; and two brothers, Walter Dippold and Richard Dippold. There will be no visitation. The funeral service will be held at 10 am Monday, January 17, at St. Andrew Lutheran Church. Due to family health concerns, funeral attendees are asked to wear masks. Interment will follow at Russell Heights Cemetery in Jackson, MO, with full military honors. Memorial contributions may be made to St. Andrew Lutheran Church or a charity of your choice.

Hugo Gerhard Dippold, 98, died January 12, 2022, at the Lutheran Home. He was born October 14, 1923, to Reverend Leopold F. Dippold and Irma Griebel Dippold in Longtown, Missouri. He graduated from Jackson High School and was drafted into... View Obituary & Service Information

The family of Hugo Gerhard Dippold created this Life Tributes page to make it easy to share your memories.