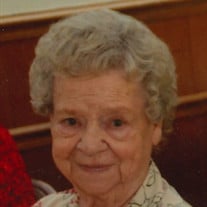 Hester Grace Turner, 92, of Jackson, Missouri died September 9, 2020 at Jackson Manor. She was born March 29, 1928 in Daisy, Missouri to Richard and Dora Dorcas Cobble. Hester was a member of the New McKendree United Methodist Church in Jackson. She and Paul D. Turner were married in Osceola, Arkansas on January 9, 1944. Paul preceded her in death on February 4, 2017. While living on their farm in the Oak Ridge community for many years, she was employed at Lee Rowan (Rubbermaid) in Jackson and retired from there in 1996. After she retired from Lee Rowan, she volunteered and enjoyed working at the Jackson Senior Citizen Center. Hester was very proud to earn her GED in 1965, since she was unable to complete her schooling prior to marriage. Hester and Paul traveled with dear friends for many years and saw much of the country. She continued to travel and had visited 48 of the 50 states, including Alaska and Hawaii. They moved to Jackson, Missouri after selling the farm in 1991. She is survived by three sons, Dr. Paul R. (Rita) Turner of Perryville, Missouri, Robert (Shirley) Turner of Marble Hill, Missouri and William (Marty) Turner of Bay St. Louis, Mississippi; eight grandchildren, Dr. Anne (Dr. Doug Williams) Turner-Williams, Dr. Jenny (Brian) Ernst, Robert (Sherry) Turner, Dr. Jeffrey (Dr. Stephanie McClure) Turner, David (Stacey) Turner, Donna Turner Donoho, Billy Turner, Julie (Troy) Seals; 11 great-grandchildren; and several nieces and nephews. She was preceded in death by her parents, Richard and Dorcas Cobble; three sisters, Hazel Hilligass, Helen Friese and Hilda Search; and an infant son, Steven Turner. A social-distancing visitation will be held 12:00 pm to 2:00 pm Sunday, September 13, 2020 at Ford and Sons Funeral Home in Jackson. Funeral service will follow at 2:00 pm Sunday at the funeral home in Jackson with the Rev. Jimmie Corbin officiating. Burial will be at Cape County Memorial Park Cemetery in Cape Girardeau. Memorial contributions may be given to New Salem United Methodist Church Cemetery Fund. Online condolences may be made at www.fordandsonsfuneralhome.com.

Hester Grace Turner, 92, of Jackson, Missouri died September 9, 2020 at Jackson Manor. She was born March 29, 1928 in Daisy, Missouri to Richard and Dora Dorcas Cobble. Hester was a member of the New McKendree United Methodist Church in Jackson. She... View Obituary & Service Information

The family of Hester Turner created this Life Tributes page to make it easy to share your memories.

Send flowers to the Turner family.