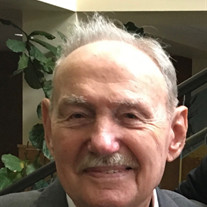 Herschel L. Hunt, 87, of Scott City, died Thursday, September 10, 2020 in his daughter's home in Tallahassee, Florida. He was born September 5, 1933 at Delta, Mo to John Curtis and Rhoda E. Barker. He married Juvita June Davie on December 27, 1952 in Cape Girardeau, MO. They shared 68 years of marriage together. Herschel retired as an underground cable supervisor from Southwestern Bell after working 30 years. He retired at the age of 55 so that he could enjoy working on his farm. Herschel retired from the Missouri National Guard after 36 years of service. At retirement he was a Sergeant Major. He was a member of the St Mark's Masonic Lodge 93 for fifty years and was a Master Mason He was an avid hunter and fisherman especially turkey and spent many hours trying to teach his grandchildren the art of turkey calling. He is survived by his wife, June Hunt of Scott City and Tallahassee, Florida; a daughter, Brenda (Mike) Powers of Tallahassee, Florida; three grandchildren; Lacey (Brett) Frank of Panama City, Florida, Currie Powers of Lake City, Florida, Jonathan (Nicole) Hitt of Beavercreek, Ohio; and two great grandsons, Landon Frank and Braylen Frank of Panama City, Florida. He is preceded in death by an infant son, Charles Curtis Hunt; a daughter, Debra Hunt Hitt; brothers, Virgil Hunt and George Hunt; and a sister, Genevieve Watson. Services will be at Ford and Son's Funeral Home on Mt. Auburn Road in Cape Girardeau, MO Visitation will be from 10:00 to 11:00 a.m. Saturday, September 26, 2020 at Ford and Sons Mt. Auburn Funeral Home in Cape Girardeau. Funeral services will follow at 11:00 a.m. Saturday at the funeral home with the Rev. Larry Lacey officiating. In lieu of flowers the family is asking for contributions to be made for the college education of his two great grandsons. Education was important to Mr. Hunt and his wishes were to see his great grandsons be successful men. Benefit fund for Herschel Hunt, c/o Bank of Missouri, 315 Crites Avenue, Scott City, MO 63780. Online condolences may be made at www.fordandsonsfuneralhome.com.

The family of Herschel Hunt created this Life Tributes page to make it easy to share your memories.

Send flowers to the Hunt family.