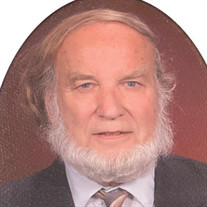 Henry Morris Sessoms, Sr., 86, of Cape Girardeau, Missouri, died peacefully on January 15, 2022, at Life Care Center in Cape Girardeau, after a year of declining health. Henry was born on May 14, 1935 in Nashville, Tennessee, the youngest of five children born to John Broadus and Adelene Lackey Sessoms. Henry was educated in the Nashville public schools and graduated from West End High School in 1953. He attended Vanderbilt University from 1953 until 1955 when he entered Naval Aviation training. Upon receiving a medical discharge the following year, he attended Middle Tennessee State University in Murfreesboro and graduated with a B.S. degree in Mathematics in 1958. After two years as an actuarial assistant with National Life and Accident Insurance Company in Nashville, he entered graduate school at George Peabody College for Teachers in Nashville, earning an M.A. degree in English in 1961. He then joined the English Department of Southeast Missouri State College. He served the University until his retirement on May 21, 1999, except for a leave taken from 1965 through 1967 to earn his Ph.D. degree in English from Vanderbilt University. This made him the senior faculty member in terms of service at the time, a record that has since been broken by other faculty. He was promoted to Professor of English in 1970 and was Chair of the English Department from 1968 to 1993. Henry was instrumental in building many of SEMO's international partnerships. He was a long-term director of the Missouri London Program from its inception in 1982 until his retirement. He also built relationships with multiple schools and universities in Japan and China, including Shanghai Teachers University, where he taught in 1989. However, the student uprising in Beijing's Tiananmen Square cut short his semester of teaching in China. Upon his return to the United States, he made many presentations to civic and educational groups about his experiences in China during the uprising. Henry also served as the director of the University's Center of International Studies from 1984 to 1986. Henry's international work continued with his wife Tammy and friends Nancy and Tim Blattner, when they began an effort in 2008 to promote literacy by collecting and sending books to rural communities in Belize. Another professional activity important to Henry was the 20 years he and his wife Tammy spent grading English Advanced Placement examinations, which led to longtime friendships with colleagues throughout the United States. He was a member of SEMO's President's Council and Copper Dome Society, and of Centenary United Methodist Church, where he taught Sunday School for many years and served as Chair of the Wesley Foundation. Henry was a slow pitch softball pitcher in the 1970's for the Profs, a team of middle-aged professors who bested teams easily twenty years their junior. He also played regular tennis matches and pickup basketball with fellow SEMO faculty, staff, and students, until a knee replacement forced his retirement from sports at age 75. For many years, Henry and his friends Max Cordonnier and Martin Needels walked regularly through downtown Cape, "supervising" the construction of both the River Campus and the Bill Emerson Memorial Bridge. Henry faced many health challenges, beginning in 1979 with his first heart bypass surgery. His will to live and the excellent care provided by Saint Thomas Hospital in Nashville, both Cape Girardeau hospitals, and a host of physicians and other medical professionals, helped him lead a long, productive life. The family expresses their gratitude to all of Henry's caregivers, with a special place in our hearts for longtime physician Dr. Clifford R. Talbert, as well as the caregivers at Crown Hospice and the Life Care Center who provided comfort in the last week of his life. Survivors include his wife Tamara "Tammy" Baldwin Sessoms of Cape Girardeau and two children, Deidre Bates (David DeNuzzo) Sessoms of Sacramento, California, and Henry "Hank" Morris (Shannon) Sessoms, Jr., of Cape Girardeau. He is also survived by three grandsons, Alexander Sessoms DeNuzzo, Jason "Jace" Sessoms DeNuzzo, and Henry "Trey" Morris Sessoms, III, in addition to many beloved nieces, nephews, grandnieces, grandnephews, extended family, and well-loved pup Ben the dog. Henry is also survived by his sister Joyce Tallent of Johnson City, TN, father-in-law Bill Baldwin, Sr., brothers-in-law Bill Baldwin, Jr., and Chris Baldwin, all of Charter Oak, MO. Henry was preceded in death by his first wife Shirley Huffman Sessoms, his parents, a sister, Eska (S.C.) Garrison; two brothers, John Broadus (Enith) Sessoms, Jr., and Bradford Kent Sessoms; brother-in-law John Tallent, mother-in-law Becky Baldwin, and his beloved Bob Dog. Friends may call from 4:00 p.m. to 6:00 p.m. Friday at Ford & Sons Mount Auburn Funeral Home in Cape Girardeau. Funeral service will be at 10:00 a.m. Saturday at the funeral home, followed by burial at Cape County Memorial Park Cemetery in Cape Girardeau. Memorials may be given to the Larry and Kathy Jones Family H.O.P.E. Campaign (P.O. Box 1785, Cape Girardeau, MO, 63701), the Humane Society of Southeast Missouri (semopets.org), the Henry Sessoms Endowed International Study Scholarship (semo.edu/giving), Friends of the Cape Girardeau Public Library (capelibrary.org/foundation), or Centenary United Methodist Church. Online condolences may be made at www.fordandsonsfuneralhome.com.

Henry Morris Sessoms, Sr., 86, of Cape Girardeau, Missouri, died peacefully on January 15, 2022, at Life Care Center in Cape Girardeau, after a year of declining health. Henry was born on May 14, 1935 in Nashville, Tennessee, the youngest of... View Obituary & Service Information

The family of Henry Morris Sessoms Sr. created this Life Tributes page to make it easy to share your memories.

Send flowers to the Sessoms family.