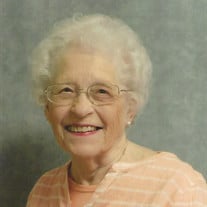 Helen Virginia Meyer, a faith-filled servant of her Maker, passed away peacefully on August 6, 2020 at the age of 89 at Chateau Girardeau Health Center. She was born July 26, 1931 in Freidheim, MO, the third of five daughters born to Martin and Della Guemmer Schamburg. In 1949, Helen graduated from Perryville High School in Perryville, MO. She then worked in Jefferson City as a secretary for State Senator Leo Rozier. Helen met Rupert Charles Meyer when he was an assistant manager at the Kroger store in Perryville, MO. On July 21, 1956, they were married at St Boniface Church in Perryville. Shortly after, they moved to Bonne Terre, MO. In 1960, they moved to Cape Girardeau. Helen joined the congregation at Trinity Lutheran Church, where she remained an active member, especially in the Ladies Aid, the Bible Study group, and the Prayer Shawl Ministry. For many years Helen served as an election judge in Cape Girardeau and was a Girl Scout troop leader for both of her daughters. She worked as a secretary at General Pest Control, then was a service warranty representative at Sears. After that, she worked as a medical transcriptionist for several area doctors. Helen is survived by her three children, Becki (Tom) Essner of Cape Girardeau; Lisa (Harry) Smith of Charlotte, NC; and John (Suzanne) Meyer of Dallas, TX; grandchildren Josh (Jenny) Essner of Alexandria, KY; Katie (Tommy) Garlock of Aiken, SC; Mackenzie (Drew) Steck of St. Louis, MO; Harry L Smith III, Sam Smith, Ryan Smith, Lauren Smith, Luke Smith of Charlotte, NC; Austin Meyer of Dallas, TX; Elizabeth Meyer of Denver, CO; and Jack Meyer of Austin, TX; great-grandchildren Charlie Essner and Grace Essner of Alexandria, KY. She is also survived by a sister, Betty (Kelly) Brune of Freidheim, MO. Preceding her in death was her husband, Rupert, her parents, and three sisters: Laverne Fiehler, Dorothy Flentge, and Janet Conrad. A private burial service will be held with a celebration of life memorial to be held at a later date. Memorial contributions may be given to Trinity Lutheran Church, 100 Frederick Street, Cape Girardeau, MO 63701.

Helen Virginia Meyer, a faith-filled servant of her Maker, passed away peacefully on August 6, 2020 at the age of 89 at Chateau Girardeau Health Center. She was born July 26, 1931 in Freidheim, MO, the third of five daughters born to Martin... View Obituary & Service Information

The family of Helen Virginia Meyer created this Life Tributes page to make it easy to share your memories.

Helen Virginia Meyer, a faith-filled servant of her Maker, passed...

Send flowers to the Meyer family.