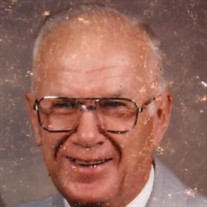 Harold Ray Sanders, 94, of Niceville, Florida, formerly of Cape Girardeau, left this earth at the age of 94 on July 3, 2021, at his home in Florida to join his wife of 56 years, Dorothy in Heaven. She was the love of his life, and he has missed her every day for the last 17 years. Harold was born March 4, 1927, in Cape Girardeau to Roy and Bertha Johnson Sanders. He lived all his life here until moving to Niceville four years ago to be near his daughter and son-in-law. Harold attended Southeast Missouri College and Rolla School of Mines where he studied Pre-Engineering. After 2 years of college, he came back to Cape and married Dorothy in 1947. His grocery career began at Hitts grocery store on South Ellis. He then started working for A&P Supermarket. He worked for 31 years at A&P retiring as store manager in 1977 when the store closed. He then worked in management for Schnuck's for 15 years, retiring in 1992. He loved the grocery business because of all the people he met. If he met you once, he never forgot your face or name. He called his co-employees his second family. He and Dorothy loved to travel in their RV and attended many antique car and motorcycle meets. Their favorite stops were Hershey, Pennsylvania and Davenport, Iowa, spending year after year with friends they had made along the way. Harold began collecting and restoring antique cars in 1956. His passion spilled over to antique Indian motorcycles and antique toys. He was a charter member of the Capaha Antique Car Club which continues still today. He made a lot of lifelong friends with similar interests for restoring antique cars. While in Niceville, Florida he was a resident of American House, an independent senior living facility. He is survived by his daughter and son-in-law Linda and Steve White of Niceville, Florida; two grandsons, Adam White of Valdosta, Georgia and Cory White and wife Kay of Orlando, Florida; three beautiful great-granddaughters, Brianna, Arica and Grace; many nieces and nephews. We will miss him dearly. He was preceded in death by his wife, Dorothy; his parents, Roy and Bertha Sanders; sister and brother-in-law, Ella and Melvin Gateley. Graveside service will be Wednesday, July 14, 2021, at 11:00 a.m. at Cape County Memorial Park Cemetery.

Harold Ray Sanders, 94, of Niceville, Florida, formerly of Cape Girardeau, left this earth at the age of 94 on July 3, 2021, at his home in Florida to join his wife of 56 years, Dorothy in Heaven. She was the love of his life, and he has missed... View Obituary & Service Information

The family of Harold Ray Sanders created this Life Tributes page to make it easy to share your memories.

Send flowers to the Sanders family.