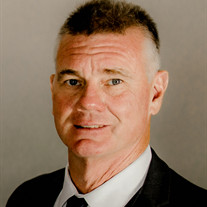 George Roscoe Below, 58, of Friedheim, Missouri died Friday, October 1, 2021. He was born June 28, 1963 in Cape Girardeau to James Roscoe and Carmen Marie Brennecke Below. He and Deborah L. Peterson were married January 4, 1992 at Washington, Missouri. George was a 1981 graduate of Delta High School. George started farming at an early age on a family farm and he maintained a farm at his home. George made a lifelong career as a member of Local 513 Operating Engineers. After working several years for Fred Weber Construction in St. Louis, Missouri, George became the lead heavy equipment instructor at IUOE Mingo Job Corps until his retirement, where he mentored hundreds of young adults seeking career education. He loved his community and formed lifelong friendships with his neighbors. He took every opportunity to support Oak Ridge youth sports, particularly basketball. George coached youth sports, including girls basketball earlier in his life; and his son's youth baseball and basketball teams. George was a high school athlete and later in life developed a passion for snow skiing. He committed to travelling one or more times every winter to snow ski with family and friends. He was a member of New McKendree United Methodist Church. He proudly served two terms on the Oak Ridge R-6 School Board and was a member of the Oak Ridge Booster Club and Foundation Board. During his tenure on the school board, he successfully advocated for the addition of agriculture education, the Future Farmers of America (FFA) club and a girls' basketball program. His large family and broad group of friends remember him as a relationship builder, a hard worker, trustworthy, loyal, and a leader. Survivors include his wife, Deborah Below of Friedheim; son, Ryan (April) Below of St. Charles, Missouri; brother, Sam (Tammy) Below of Delta, Missouri; two sisters, Martha (deceased, Darris) Dalton of Cape Girardeau and Mary Lou (Mike) Dobron of Springfield, Illinois; sister-in-law, Mary Below of Sikeston, Missouri; and dozens of loving nieces, nephews and cousins. He was preceded in death by his parents and brother, James J. Below. Friends may call 4:00 pm to 8:00 pm on Tuesday, October 5, 2021 at Ford and Sons Mt. Auburn Chapel in Cape Girardeau. Funeral service will be at 10:00 am Wednesday, October 6, 2021 at New McKendree UMC South Campus in Jackson with the Rev. Bryan Wendling officiating. Burial will be private at Cape County Memorial Park at a later date. Memorial contributions may be given to support a scholarship in George's name for an Oak Ridge student attending Southeast Missouri State University. Checks should be made payable to the Oak Ridge R-6 Foundation.

George Roscoe Below, 58, of Friedheim, Missouri died Friday, October 1, 2021. He was born June 28, 1963 in Cape Girardeau to James Roscoe and Carmen Marie Brennecke Below. He and Deborah L. Peterson were married January 4, 1992 at Washington,... View Obituary & Service Information

The family of George Roscoe Below created this Life Tributes page to make it easy to share your memories.

Send flowers to the Below family.