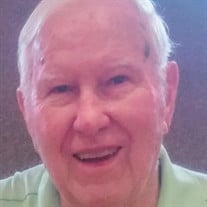 Gary Wayne Metje, 85, passed away on August 13th, 2020 at Southeast Hospital. He was born on December 3rd, 1934 in Cape Girardeau, MO, the son of Eldon H. and Edna Popp Metje. He married Willa Clodine Wachter in Cape Girardeau on May 29th, 1955. She preceded him in death on September 6th, 2018. He graduated from Cape Central High School and was in the Navy Reserves. He worked as a salesman for Harris Truck & Trailer for 35 years and was several times a top 10 in Dorsey trailer sales. His years of experience and strong work ethic led him to open his own business, G&M Trailers, in 1991. Gary was an active member of Evangelical United Church of Christ. He and Clodine developed lifelong friendships there and were involved in many activities including making apple butter every September, Sunday School, and church suppers. He also enjoyed playing fastpitch softball, bowling, golfing, and fishing. His family will remember him as an avid card player, and will cherish the many family vacations they enjoyed together. Survivors include a sister Carolyn Nickens of Elsberry, MO, a son and daughter-in-law, Randy and Kim Metje of Staunton, VA; a son, Kirk Metje, of Cape Girardeau; grandchildren Keri (Josh) Billig of Davidson, NC, Brad (Michelle) Metje of Fishersville, VA, Katelyn (Ted) Ivie of Cape Girardeau, Kris (Alli) Metje of Cape Girardeau, and Joshua Metje of Kansas City. Also surviving are great-grandchildren Annabelle and Jay Billig, Michael and McKenzie Via, and Blake, Max, Hazel, and Olive Ivie. He was delighted at the news that Kris and Alli would be adding to the family in November. In addition to his parents and wife, he was preceded in death by a brother, Roy Metje, and a son, Todd Michael Metje. Private service and entombment were held at Cape County Memorial Park Mausoleum with Pastor Debra Tracy officiating. Public visitation will be held on Sunday, August 30th, 2020 from 2pm to 3pm with a Celebration of Life Memorial Service following at 3pm at the Evangelical United Church of Christ at 33 S. Ellis in Cape Girardeau, MO. In lieu of flowers, expressions of love and sympathy may be made to the Evangelical United Church of Christ Memorial Fund. Fisherman’s Prayer God grant that I may live to fish for another shining day, But when my final cast is made I then most humbly pray, When nestled in your landing net As I lay peacefully asleep, You’ll smile at me and judge that I’m “good enough to keep.”

Gary Wayne Metje, 85, passed away on August 13th, 2020 at Southeast Hospital. He was born on December 3rd, 1934 in Cape Girardeau, MO, the son of Eldon H. and Edna Popp Metje. He married Willa Clodine Wachter in Cape Girardeau on May 29th,... View Obituary & Service Information

The family of Gary W. Metje created this Life Tributes page to make it easy to share your memories.

Send flowers to the Metje family.