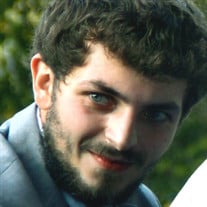 Gabriel Alexander “Gabey” Sample, 21, of Cape Girardeau was called home Friday, Dec. 24, 2021. He was born May 14, 2000, to Kim Sample and Joel Bland at Southeast Hospital. He had a carefree childhood, spending most of his days riding his bike with nothing but his Spider Man undies on. His passion was football until middle school, when he found his love for basketball. He played four years at Nell Holcomb Elementary School. He graduated Nell Holcomb in the eighth grade and went on to attend Cape Girardeau Central High School. He then learned the trade of welding at Cape Girardeau Career and Technology Center. Shortly after graduating, Gabey moved out on his own for the first time. He moved to Georgia with his cousin, Devon, where he would spend some of the best times of his life. He loved kayaking, traveling, playing his PS4, and golfing. He also loved spoiling his little brother, Lannie. He always making sure he had the coolest kicks. Gabey is survived by his mother, Kim; father, Joel; sister, Haley; brother, Landen; best friends (cousins), Devon and Zane Sample; Nana Elizabeth, Nana Carol, Papa Dave, Opa Tony, and lots of aunts and uncles. He was preceded in death by his grandmother, Debbie; childhood dog, Bandit; cousin, Dustin; great-granny Stephens; and his great-papa, Stephens. Visitation will be from 10 a.m. until noon Saturday, Jan. 1, 2022, at Ford and Sons Mount Auburn Funeral Home. A celebration of life service will follow at noon at the funeral home with Pastor Rex Barker officiating. In lieu of flowers memorials may be given to Ford and Sons to assist the family with funeral costs.

The family of Gabriel Alexander "Gabey" Sample created this Life Tributes page to make it easy to share your memories.

Send flowers to the Sample family.