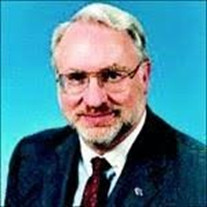 Dr. Fred E. Saalfeld of Springfield, VA, passed away peacefully in his home on Tuesday, August 25, 2020. A native of Joplin, MO, Dr. Saalfeld earned his Bachelor of Science degrees in Chemistry, Physics, and Mathematics (with Honors) from Southeast Missouri State University (SEMO) where he was a standout intercollegiate basketball player. While at SEMO, Dr. Saalfeld met the love of his life Mary Elizabeth ("Liz") Renner. Dr. Saalfeld continued his education at Iowa State University where he earned both his graduate and doctoral degrees in physical chemistry, inorganic chemistry, and mathematics. While at Iowa State, he married Liz in 1958. Their only son, Fred Jr, was born in 1960. A passionate scientist, Dr. Saalfeld began his 40-year civilian career with the National Research Laboratory in 1962. In the first of many stellar achievements and scientific advancements, Dr. Saalfeld and his team at the NRL were responsible for developing the Central Air Monitoring System (CAMS) that scrubs and makes recycled air breathable on US Navy submarines. CAMS allowed nuclear submarines and crews to remain safely submerged for far greater periods and extended the strategic advantage of our nation's nuclear triad. The fundamental science and technology of CAMS is used today in the Trident and Seawolf classes of submarines, and NASA uses a variant of this system for manned space vehicles. Dr. Saalfeld was a charter member of the Senior Executive Service under President Carter. He was conferred the presidential rank of Meritorious Executive by President Reagan. In 1991, Dr. Saalfeld was named the Federal Executive of the Year. He was conferred the rank of Distinguished Executive by President G.H.W. Bush and then again by President Clinton. In 1982, Dr. Saalfeld became the Technical Director of the Office of Naval Research (ONR), a $2 billion agency that pushes state-of-the-art in science and technology to make technical systems and performance of the United States Navy and Marine Corps the best in the world. Known for his quick wit, engaging personality, gifted mind, and strategic mindset, Dr. Saalfeld's favorite characterization was that ONR pursued technological advances for our nation's warfighters "from the crab to the crab nebula." Upon his retirement in 2002 as the Executive Director/Technical Director of ONR, the Chief of Naval Research established the Fred E. Saalfeld Award for Lifetime Achievement in Science and named Dr. Saalfeld as its inaugural recipient. In retirement Dr. Saalfeld continued to pursue his academic interests, including advising and consulting in Naval SandT, reviewing technical papers and pursuing many diverse on-line courses. Dr. Saalfeld was preceded in death by his parents, sister, wife, and son. He is survived by five nieces and nephews, nine great nieces and nephews, his surrogate family in Virginia, and numerous relatives across Colorado, Texas, and Missouri. Mindful of present conditions, a limited memorial service will be held at Grace Episcopal Church in Alexandria, VA at a future date. In lieu of flowers, memorial contributions may be given to the Fred E. Saalfeld Family Scholarship, Southeast Missouri University Foundation, One University Plaza, MS 7300, Cape Girardeau, MO 63701. Donations may also be made online at semo.edu/give . Please include the name of the scholarship in the designation. Dr. Saalfeld will be privately interred in Missouri, where he will be re-united with his beloved Liz and Fred Jr.

Dr. Fred E. Saalfeld of Springfield, VA, passed away peacefully in his home on Tuesday, August 25, 2020. A native of Joplin, MO, Dr. Saalfeld earned his Bachelor of Science degrees in Chemistry, Physics, and Mathematics (with Honors) from Southeast... View Obituary & Service Information

The family of Fred Saalfeld created this Life Tributes page to make it easy to share your memories.

Send flowers to the Saalfeld family.