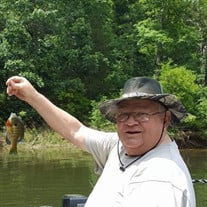 Franklin Delano Clippard, 78, of Cape Girardeau, Missouri passed away Friday, August 28, 2020 at his home surrounded by his children and dear friend Ella. Frank was born April 11, 1942 in Greenbrier, Missouri to John E. and Ruby A. Clippard. He was a graduate of Zalma High School. On July 29, 1960 he married his wife of 56 years, Catherine Wunderlich Clippard. She preceded him in death on May 23, 2016. Together they had three children, Lori Clippard, Shelly Gaffigan, and John Clippard. Frank was an avid fisherman his whole life and enjoyed hunting in his younger years. He spent his life in the food industry as a broker and retired as vice-president of Bene-Patterson Company. He also served his country in the Navy Reserves. After his retirement he ventured into car sales, and opened Frank's Cars, operating this business until July of 2020. Survivors include his children, Lori (Fara McDonald) Clippard of Cape Girardeau, Shelly (Tom) Gaffigan of Knoxville, Tennessee and John Clippard of Cape Girardeau; sister, Kaye Lampman; brother, Lonnie (Tom) Clippard; four grandchildren, Ryan Cagle, Allison Cagle, Kendra Cagle and Logan Clippard; one great-grandchild, Braedyn McElhaney; special friend, Ella Dean; and many nieces and nephews. He was preceded in death by his parents; wife; brothers, James E. Clippard and Charles Curtis Clippard; sisters, Dora Lee Ross, JoAnn McKee and Wanda Caldwell. He was also preceded in death by his beloved grandson, John David "J.D." Clippard. The family offers their sincere appreciation to Crown Hospice for the loving care they provided not only to Frank, but to the entire family. There will be no visitation due to COVID-19. A graveside service with full military honors will be 1:00 pm Thursday, September 3, 2020 at the gazebo at Cape County Memorial Park Cemetery and Mausoleum in Cape Girardeau with the Rev. Weston Wildauer officiating. In lieu of flowers the family requests memorial contributions be made to Crown Hospice. Online condolences may be made at www.fordandsonsfuneralhome.com. Ford Sons Funeral Home - Mt. Auburn is in charge of arrangements.

Franklin Delano Clippard, 78, of Cape Girardeau, Missouri passed away Friday, August 28, 2020 at his home surrounded by his children and dear friend Ella. Frank was born April 11, 1942 in Greenbrier, Missouri to John E. and Ruby A. Clippard. He... View Obituary & Service Information

The family of Frank Clippard created this Life Tributes page to make it easy to share your memories.

Send flowers to the Clippard family.