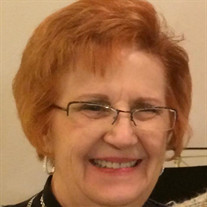 She Touched So Many Lives: A Classy Dame Remembered Fonda Kay Davis, 75, of Cape Girardeau, Missouri passed away Monday, October 5, 2020 at Southeast Missouri Hospital. She was born May 8, 1945 in Evansville, Indiana to William and Ramonda... View Obituary & Service Information

The family of Fonda Kay Davis created this Life Tributes page to make it easy to share your memories.

She Touched So Many Lives: A Classy Dame Remembered