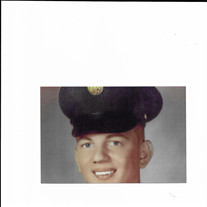 Ernest C. Adams Jr. of Cape Girardeau was born in Whitesburg, Kentucky, on July 30, 1943, the son of Ernest Clifton Adams Sr. and Opal Hall Adams. He married Janet Hetherington In Danville, Illinois, on June 21, 1976. Ernie was called home by his Savior on Thursday, Sept. 10, 2020, after a courageous battle with cancer. Ernie trained as a radiologic technologist in Louisville, Kentucky, and served In the U.S. Army in Vietnam in both combat and X-ray technologist roles. Upon return to the states, he quickly rose to positions as radiology supervisor in Illinois, Indiana and Missouri. He was the radiology director at Saint Francis Medical Center in Cape Girardeau for more than 20 years. Ernie loved dogs and enjoyed the company of many during his life. He also was an avid fan of professional sports, particularly the St. Louis Cardinals. His favorite basketball team was his beloved Kentucky Wildcats. Survivors include his wife Janet, of the home; son, James Adams of Cape Girardeau; and daughters, Melissa (Sam) Godfrey of Evanston, Wyoming and Jennifer Adams of the home. Ernie also leaves behind three grandchildren, Tayler Godfrey of Philadelphia and Hayden and Hannah Godfrey of Evanston. Additional survivors are his brother, Donnie Laughlin of Greenfield, Indiana; and sisters, Rosemary (Robert) Calhoun of Lexington, Kentucky, and Diane (Thomas) Lewis of Whitesburg, Kentucky. His three nephews and three nieces will sadly miss their "Uncle Junior." There will be a private graveside service at Sunset Memorial Park in Danville, Illinois, for family members only. A celebration of his life will be held in Danville at a later date.

The family of Ernest C. Adams Jr. created this Life Tributes page to make it easy to share your memories.

Send flowers to the Adams family.