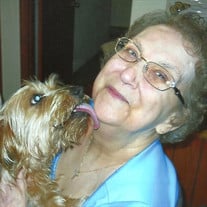 It is with great sadness that the family of Emma Mae Cannon announces her passing after a prolonged illness. Emma passed away peacefully at Southeast Hospital surrounded by family and loved ones. She was born on October 8, 1944 in Daisy, Missouri to Roy Barks and Edna (Hahn) Barks. Emma will be lovingly remembered and greatly missed by her husband of 57 years, Charles "Ray" Cannon. Emma was preceded in death by her parents (Roy and Edna) and siblings, George Barks, Harold Barks, Jerry Barks, Ray Lee Barks, Lois (Bill) LaBruyere, and Larry Barks. Emma was the last of the Barks siblings to pass. Surviving sisters-in-law are Shirley (Ray Lee) Barks, Dorothy (Jerry Lee) Barks, Karen (Robert) Cannon, and Mira (Larry) Barks. Surviving brothers-in-law are Robert Cannon and Francis Cannon. She met her future husband (Ray) at his parent's home in May of 1964. Six months later Emma and Ray married and had two children, Michael (born in 1967) and Deborah (born in 1976). They celebrated their 57th wedding anniversary November 8th 2021. She is survived by her husband, Ray Cannon and two children: son, Michael (Jan) Cannon; daughter, Deborah (Bryan) Dunham both of Cape Girardeau; and two grandchildren, Evan Dunham and Madilyn Dunham. Additionally, Emma is survived by many nieces and nephews, including: Jeanne Townsend (Jim) Hardy of Pearland, Texas, Donna (Jerry) Elder of Jackson, and Glenn Ellis Thompson of Oak Ridge, Elizabeth "Libby" (Bill) Larson of Huntsville, Alabama; Kathryn "Katie" (Kevin) Crawford of Decatur, Alabama; and Bethany Barks of Owens Cross Roads, Alabama. Additionally, Emma is survived by a great many grand nieces and grand nephews As a young woman, Emma worked at the Ralph Edwards Sportswear, coat factory for several years. She worked cooking enormous amounts of delicious homemade food for the Craftsman Union. She was known for her delicious chicken and dumplings. Emma was a generous soul and helped strangers as readily as she helped friends and family. Emma would constantly do good deeds quietly with no fanfare. She loved babies, children, and dogs. One of the great joys of her life (after raising her own children) was sitting for her cousin's children, Atticus and Zeb Parris, children of Mae's cousin Mary "Mitch" Parris. Later when she was blessed with grandchildren, Evan and Madilyn Dunham, she enjoyed watching over them too. Emma adored her grandchildren, her only regret was not spending more time with them after she started having health problems. Emma was a member of the Foxy Ladies and thoroughly enjoyed the outings with her friends. She was an avid reader of mystery romance novels. Even as her health faltered she looked for new recipes to share with family and friends. She always insisted on sending food home with everyone that walked in her door. Her famous phrases are "Are you hungry?", "Have you had something to eat?" and always "Please take some food home." A visitation for family and friends will be held on Tuesday, February 1, 2022, from 11:00 a.m. - 1:00p.m. The visitation will be at Ford and Sons Funeral Home located at 1001 N. Mount Auburn Rd., Cape Girardeau, MO 63701. Immediately following the visitation Pastor Rodger Rice will officiate the funeral service. Burial will be at the Hobbs Community Church Cemetery. Emma has requested that in lieu of flowers, memorial donations be made to her favorite charity, St. Jude's Children Hospital or Hobbs Community Church.

It is with great sadness that the family of Emma Mae Cannon announces her passing after a prolonged illness. Emma passed away peacefully at Southeast Hospital surrounded by family and loved ones. She was born on October 8, 1944 in Daisy, Missouri... View Obituary & Service Information

The family of Emma Mae Cannon created this Life Tributes page to make it easy to share your memories.

It is with great sadness that the family of Emma Mae Cannon announces...

Send flowers to the Cannon family.