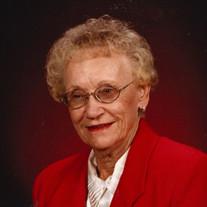 Elsie M. Siebert, 89, of Cape Girardeau, Missouri went to Heaven on Tuesday, May 25, 2021 at the Lutheran Home. She was born October 5, 1931 in Jackson, Missouri to Edmund and Emilia Meyr Haertling. She and Raymond Siebert were married January 20, 1951 at Jackson. He preceded her in death on May 6, 2019. She was the Board Office Secretary for Cape Public Schools, retiring in 1992. She enjoyed camping and volunteered at American Cancer Society by visiting breast cancer patients. She was a longtime member of Trinity Lutheran Church in Cape Girardeau, where she was on the Altar Guild, Greeter and on the Bereavement Committee. Survivors include two daughters, Judy (Rick) Wieser and Nancy (Randy) LeGrand both of Cape Girardeau; sister, Ruby Eichhorn of Chaffee, Missouri; five grandchildren, Alexandra Wieser of Estes Park, Colorado, Maxwell Wieser of Fruitland, Missouri, Raegan Wieser of Columbia, Missouri, Nicholas (Alicea) LeGrand of Jackson, Missouri and Luke (Logan Meyr) LeGrand of Cape Girardeau; and one great-grandchild, Elise LeGrand. She was preceded in death by her parents; husband; son, Terry Siebert in 1994; and a sister, Shirley Gill. Visitation will be 9:00 am to 11:00 am on Friday, May 28, 2021 at Ford and Sons Mt. Auburn Chapel in Cape Girardeau. Funeral Service will follow at 11:00 am Friday at the funeral home with the Rev. Douglas Breite officiating. Burial will be at Cape County Memorial Park Cemetery in Cape Girardeau. Memorial contributions may be given to Trinity Lutheran Church, 100 N. Frederick Street, Cape Girardeau, MO, 63701 or American Cancer Society 2 Cityplace Dr, Ste 80, Creve Coeur, MO, 63141. Online condolences may be made at www.fordandsonsfuneralhome.com. Ford and Sons Funeral Home - Mt. Auburn is in charge of arrangements.

Elsie M. Siebert, 89, of Cape Girardeau, Missouri went to Heaven on Tuesday, May 25, 2021 at the Lutheran Home. She was born October 5, 1931 in Jackson, Missouri to Edmund and Emilia Meyr Haertling. She and Raymond Siebert were married January... View Obituary & Service Information

The family of Elsie M. Siebert created this Life Tributes page to make it easy to share your memories.

Send flowers to the Siebert family.