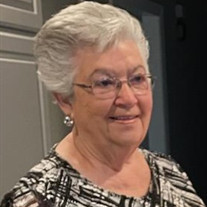 Elizabeth Jane (Bryant) Hicks, daughter of the late Dick W. Bryant and Ollie (St. John) Bryant, was born on the family's farm, near Tram Switch railroad line (5 miles south of Morehouse Missouri), New Madrid County, Missouri, on October 23, 1940. She peacefully departed this life from her home in Jackson, Missouri, on Friday, February 11, 2022, at 3:40 a.m. CST, at the age of 81 years. On October 26, 1957, in Hernando, Mississippi, she was united in marriage to Franklin Dee Wayne Hicks, who survives her. In addition to her husband, she is survived by her sons Dale Hicks, and his wife Kimberly, of Branson West, Missouri, and Kendal Hicks, and his wife Regina, of Fort Myers, Florida. She is also survived by six grandchildren: Krystin Hoagland, Nathan, Isaac, and Josiah Hicks, Breanna Jeffords, and Kassidy Dowell along with six great grandchildren. Other than her parents, she was preceded in death by her brother, Billy G. Bryant and infant sister, Loretta Bryant. At the young age of 10 years, while attending church camp, she accepted Jesus as her Lord and Savior and was baptized years later by her own son, Reverend Kendal B. Hicks. She was a member of Lynwood Baptist Church, Cape Girardeau, Missouri, and currently attended First Baptist Church in Jackson, Missouri. She enjoyed working Wednesday night kitchen meal duty in each church she attended, which also included the four years at Cornerstone Baptist, Jefferson City, Missouri, while she and Dee Wayne lived in Jefferson City. Jane represented Morehouse, Missouri, in the 1957 Cotton Carnival Contest, and was crowned reigning Queen for 1958. Jane and Dee Wayne were the proud parents of two sons, Dale and Kendal. She always felt honored to be Cub Scout den mother for her sons, and her group of Cubbies, for five years. She was an arts and crafts kind of lady, creating church worship banners and, also, flower arrangements for weddings. She also made floral arrangements that were given away at the annual Modern Woodman Christmas dinners. Additionally, Jane was selected to serve as the Missouri MW representative at the National Modern Woodman Convention on two, separate occasions. Jane worked 13 years for First National Bank (now known as Montgomery Bank) of Sikeston, Missouri. In her next career move, she was very proud to have been the first woman hired at Gold Bond Ice Cream company in Sikeston, Missouri, where she would work for the next 18 years before commencing her retirement. Jane would laughingly recall employees tapping on the office window for Jane to "clock them in and out" since the plant was just established and a time clock had not yet been installed. Jane and Dee Wayne simultaneously had a farm they worked themselves through hands-on labors of love. She loved driving the tractors, especially the open air ones. Along with her husband, she was able to teach, and develop, agriculture management and production techniques with her two sons through their teenage years. Visitation will be held Tuesday, February 15, 2022, 10:00 am - 12:00 pm at Cape County Memorial Park Mausoleum, Cape Girardeau, MO. Funeral services will be held on Tuesday, February 15, 2022, 12:00 pm at the Cape County Memorial Park Mausoleum, Cape Girardeau, MO. Entombment will take place in the Cape County Memorial Park Mausoleum. Memorials are suggested to the Wounded Warriors, St. Jude Children Hospital, Safe Harbor Animal Shelter-Jackson, MO. Ford and Sons Funeral Home Jackson, MO. was in charge of arrangements Online condolences can be given at www.fordandsonsfuneralhome.com.

The family of Elizabeth Hicks created this Life Tributes page to make it easy to share your memories.

Send flowers to the Hicks family.