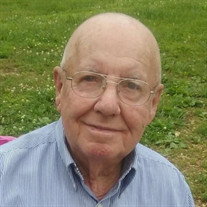 Eldon Wayne Mahan of Cape Girardeau, Missouri passed away Saturday, September 26, 2020. Eldon was born January 14, 1931 in Altamont, Kansas to Oren and Ruth Mahan. He joined the Airforce December 15, 1950 and worked as a Radar Operator. He was very patriotic and made sure to educate his children on proper care of the flag and had great love for his Country and was so proud to have served. One of his favorite trips of his lifetime, was when he had the privilege of going on the Missouri Honor Tour to Washington D.C in September 2018. Eldon worked in weed and pest control for many years and started his own company “Mahan Weed and Pest Control Inc.” in 1971 that he owned and operated for almost 45 years. He volunteered for the Jackson Senior Center and delivered Meals-on-Wheels for several years and loved to visit and bring a smile to the faces of the people he delivered to. He also volunteered at Southeast Hospital from November 2012 and put in over 2100 hours until he was no longer able to go due to Covid. Living in the country and being a farmer was his passion. He loved having cows and horses and all things related to farming. He shared his loved for animals with most of his children, and made sure his children always had dogs, cats, cows, sheep, horses, and several other species of animals even if it meant added work for him to take care of them. He was a jolly man, who loved a good laugh even if it was at his own expense. He loved to tease others but had a great sense of humor and was always able to laugh at himself too. He was always down for a bowl of ice cream, especially homemade. He was preceded in death by his parents. He was survived by his wife of 42 years, Debby Mahan. His children; Bill Mahan, Karen Mahan, Jennifer (Troy) Truitt, Penny (Robert) Jones, and Patti (Jeff) Bullington. His grandchildren; Julie (Phillip) Thomson, Brandon (Pami) Mahan, Lauren (Jonathan) Rockhill, Luke, Tyler (Julie), Travis, Andrea, and Alex Truitt. Jillayne, Branden, Alissa, and Ashlynn Jones. Josh and Graycen Bullington. Great-grandchildren; TJ Thomson, Bauer and Annie Mahan, and Ella Rockhill. His sister, Norma Andis. And countless other family members and friends. He was known by many and loved by all. He will be greatly missed. Private family memorial to be held at a later date. Memorial Contributions may be given to Wounded Warriors Project https://support.woundedwarriorproject.org/default.aspx?tsid=10043&ovr_acv_id=2703 Or Wounded Warrior Project, PO BOX 758516, Topeka, KS 66675.

Eldon Wayne Mahan of Cape Girardeau, Missouri passed away Saturday, September 26, 2020. Eldon was born January 14, 1931 in Altamont, Kansas to Oren and Ruth Mahan. He joined the Airforce December 15, 1950 and worked as a Radar Operator. He was... View Obituary & Service Information

The family of Eldon Wayne Mahan created this Life Tributes page to make it easy to share your memories.

Send flowers to the Mahan family.